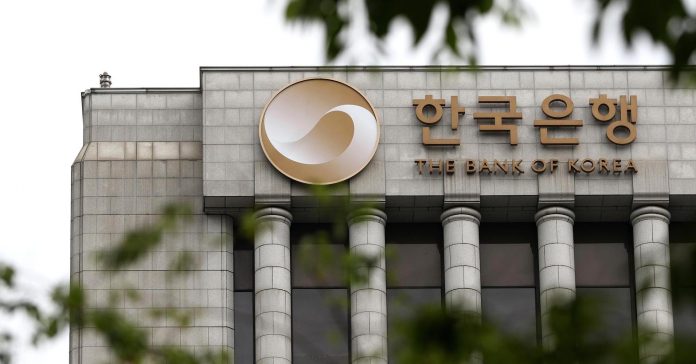 The Bank of Korea left its key interest rate unchanged on Tuesday, as expected, taking note of
muted inflationary pressure and showing caution ahead of any further monetary tightening from the U.S Federal Reserve’s policy meeting on March 20-21.

The Monetary Policy Board voted on Tuesday to keep the seven-day repurchase rate at 1.50 percent in the last rate decision before Governor Lee Ju-yeol’s term ends in March. Governor Lee is due to hold a news conference from 0220 GMT.

All 14 economists surveyed by Reuters predicted the central bank would keep its benchmark interest rate unchanged while assessing the effects of its November rate rise and global
economic conditions.

Eight of the 14 economists surveyed expected the BOK to lift rates in May, with the others seeing a rise later. Markets were little changed after the widely expected decision.

The won was up 0.3 percent against the dollar as of 0053 GMT, while March futures on three-year treasury bonds barely changed at 107.73.

The U.S. Commerce Department has recommended President Donald Trump impose steep curbs on steel imports, including those from South Korea, after slapping bigger taxes on washers and solar panels in January. There is also the risk a strong won would hurt the country’s export competitiveness.

Such uncertainties underscore the challenge facing the BOK’s new governor who should be nominated by President Moon Jae-in before Lee’s term ends on May 31.

The new governor may soon be faced with challenge of raising interest rates without undermining growth or weakening consumption by households already saddled with record debt.

“Given all eyes are with the Fed, and as worries about exports are growing, the rate decision probably was an uneventful process. It is also Governor Lee’s last,” said Yoon Yeo-sam, a fixed income analyst at Meritz Securities.

Yoon expects the BOK to raise interest rates in the second half of this year as the nation’s financial markets will remain calm even if the Fed raises interest rates.

“Unless the policy rate differential between South Korea and the U.S. is as wide as 100 basis points, it will be OK and we won’t see major capital outflows,” Yoon said.

In November, the central bank raised the base rate by 25 basis points, its first tightening in six years. It sees the economy as likely to expand 3.0 percent this year, slowing slightly from last year’s 3.1 percent.

The South Korean economy unexpectedly shrank in the fourth quarter as struggling car exporters and industrial production failed to keep up the previous quarter’s dashing pace, posting its worst performance since 2008.

Inflation eased to 1 percent in January, the slowest in 17 months, decelerating from December’s 1.5 percent and undershooting the 1.3 percent seen in a Reuters poll of economists.

Such indicators have reinforced a broad consensus that the central bank’s monetary tightening will be gradual this year as export- and investment-led growth moderates after rapid expansion in 2017.