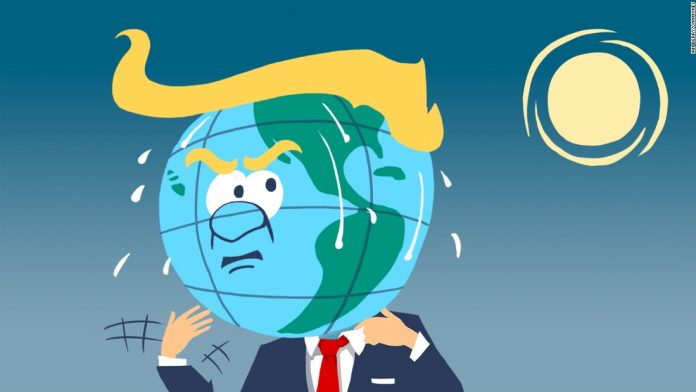 And that’s bad for all of us — especially future generations.

These are facts supported not only by a consensus of the world’s climate scientists but also by nearly every head of state. That is, of course, with one notable exception: Donald Trump.

The US President famously has called climate change a hoax. More recently he’s said “Nobody really knows” if it’s real. And this week he moved to unravel many American climate change regulations. These policy shifts — which include a review of the Clean Power Plan and the repeal of a ban on new coal mining leases on federal public lands — reasonably can be expected to increase pollution and contribute to more warming. They also, depending on how reviews go, could amount to the United States de facto reneging on its commitments to the 2015 Paris Agreement, in which nearly every country pledged to help reduce fossil fuel pollution and limit dangerous warming.

It’s unclear whether the United States will abandon the Paris Agreement entirely. Doing so could take years, since the country already is committed. But the executive order Trump signed on Tuesday signals the United States is going it alone on climate change policy. At a time in which other world leaders say the fossil-fuel era must come to an end, Trump says the opposite.

“My administration is putting an end to the war on coal,” Trump said at the US Environmental Protection Agency on Tuesday.

“We can’t power the country on pixie dust and hope,” said US Interior Secretary Ryan Zinke.

Related: The Paris Agreement is bigger than Trump … isn’t it?
To see just how far afield this pro-coal and apparently anti-clean-energy rhetoric really is, take a look at a few comments below from other heads of state and government officials. These comments come from news reports, government websites and other official sources. Most were collected in a July 2016 Sierra Club report, which was updated in November, just before the US election. That report from the environmental group claimed Trump would become the only head of state who denies the science of climate change.

As you think about this disconnect between Trump and the rest of the world, please remember that the facts on climate change are clear and have been for years: The world is warming and humans are largely responsible, primarily by burning fossil fuels, which puts heat-trapping gases into the atmosphere; and chopping down forests, which store carbon.

Doing nothing will be costly and unfair to the poor and to future generations, leading to worse droughts, bigger wildfires, climate migration, rising seas and possibly mass extinction. But there are solutions — from carbon taxes to renewable energy research and development. Most Americans support these sorts of climate fixes. Nearly 70%, for example, support strict limits on carbon dioxide pollution from coal power plants; and 82% support funding for renewable energy research and development, according to surveys from the Yale Program on Climate Change Communication.
Related: The geography of American climate change confusion

But the US federal government appears to be on its own wavelength on this issue.

The trouble is that the United States is the second biggest annual climate polluter, after China.

Its emissions are likely to be felt worldwide.

Russia: ‘One of the gravest challenges’

Climate change has become one of the gravest challenges humanity is facing. … Caused by global warming, hurricanes, droughts, floods and other anomalies are the source of economic damage.

Qatar: ‘It is a real problem … worsening steadily’

The climate change phenomenon is one of the major challenges of this era. It is a real problem, existing and worsening steadily and raising several complex problems with intertwined economic, environmental and social dimensions, especially in its relation to food security and water, where the rate of desertification is increasing in many world countries and the agricultural sector is deteriorating.

China: ‘A shared mission for mankind’

Tackling climate change is a shared mission for mankind. … Let us join hands to contribute to the establishment of an equitable and effective global mechanism on climate change, work for global sustainable development at a higher level and bring about new international relations featuring win-win cooperation.

(The country) has declared war on deforestation and has put forward a massive project to turn all the mountains of the country into mountains of gold, thickly wooded with trees … (as part of a) national effort to mitigate climate change by reducing greenhouse gas emissions.

Maldives: ‘We cannot do this alone’

The Maldives believes that climate change poses as the most pressing developmental and security challenge of the 21st century. As one of the world’s lowest lying island nations, our country faces potentially devastating impacts if bold climate action is not taken immediately. While my government is committed to undertaking all necessary efforts to strengthen the Maldives’ resilience to this global phenomenon, we cannot do this alone. Every nation has a role.

Laos: ‘The course of human history’

Unlike most calamities, global warming affects not only the livelihood of every being on the planet but also the course of human history. … In formulating policies confronting climate change, we should promote the integration of all three components of sustainable development that is economic development, social development and environmental protection.

It is important that we act, because climate change is becoming an increasingly serious problem for all nations developed and developing alike — we are already seeing some emerging nations emitting more greenhouse gas than developed nations. The biggest challenge is for major emitters like China and India to pledge emission reductions under an international framework, recognizing the seriousness of the issue for themselves.

Brazil: ‘An obligation of all governments’

The climate issue is a state issue. It is an obligation of all governments.

— President Michel Temer (Source: Presidency of the Republic of Brazil, 2016)

Climate change will test our intelligence, our compassion and our will. But we are equal to that challenge.

UK: ‘We will continue to play our part’

We will continue to play our part in the international effort against climate change. And in a demonstration of our commitment to the agreement reached in Paris, the UK will start its domestic procedures to enable ratification of the Paris Agreement, and complete these before the end of the year.

France: ‘We are at breaking point’

To resolve the climate crisis, good will, statements of intent are not enough. We are at breaking point.