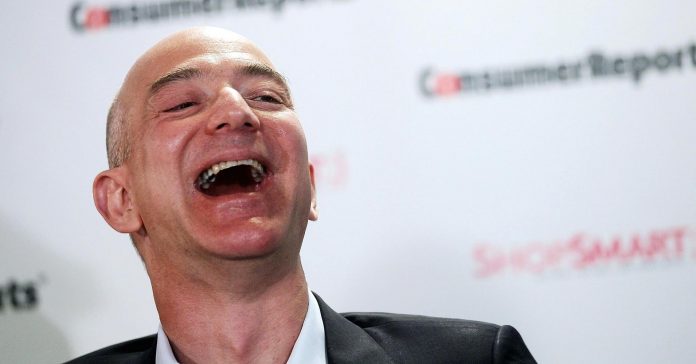 Amazon shares will soar in the next year thanks to its rapid pace of innovation and increased price flexibility, according to Goldman Sachs.

Goldman expects big things from the e-commerce giant at its annual re:Invent conference this week, where analyst Heath Terry sees a number of product announcements. Terry reiterated his buy rating and increased his price target on Amazon to $1,450 from $1,300, implying 21 percent upside from Monday’s close.

“The number of product announcements made during re:Invent has significantly increased in recent years, with more than 15 announced in 2016 versus less than 10 in each of its first 3 years,” Terry wrote on Tuesday. We “see the potential for further partnerships like the VMware collaboration (Oct-2016) and the more recent hybrid partnership with QTS.”

Amazon is hosting its annual re:Invent conference this week in Las Vegas, where it has traditionally announced new products, partnerships and updates to Web Services. Thousands are expected to attend, eager for an update on the company’s abilities in cloud technology.

“We continue to believe Amazon’s pace of innovation, increasing pricing flexibility, and an aging corporate technology base, will drive the ongoing shift of workloads into the cloud,” explained Terry. “On top of its rapid pace of innovation and its penetration into developers, Amazon Web Services’ product breadth also represents a competitive moat, in our view. With nearly 100 products available across regions, companies would need to combine multiple vendors to compile the list of services offered collectively by Amazon Web Services.”

The retail behemoth has continued to impress Wall Street with its climb to the top of retail and online shopping. Led by billionaire Jeff Bezos, the company has seen its shares appreciate roughly 60 percent since the start of January, preceding what is expected to be a strong holiday season.

Terry also noted that Amazon’s “retail reach” now expands far beyond traditional categories and is disrupting areas like health care, advertising, and logistics. Within the past year, Amazon has acquired Whole Foods Market, made some curious movements in the pharmaceutical and health care space, and announced that it was looking to establish a second headquarters, known as HQ2.

“Amazon’s announcement of HQ2 created significant media attention and local/state government interest around its stated 50,000 jobs and $5 billion of investment,” concluded Terry. “It is possible that the location of the new headquarters could provide some insight into the way management is thinking about the positioning of Amazon Web Services.”