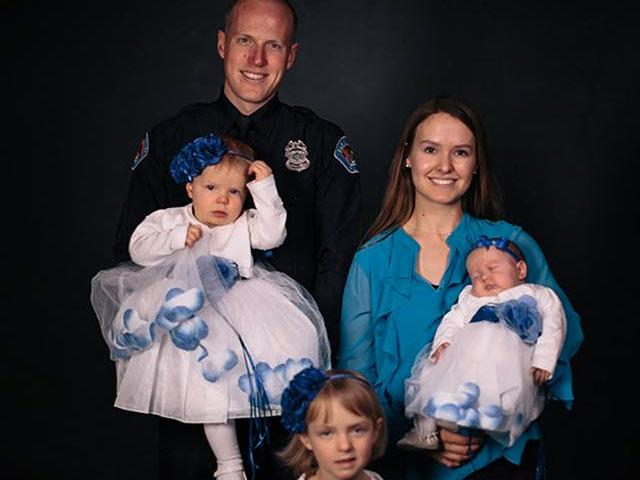 Holets met Crystal Champ responding to a call on September 23. Champ was homeless and nearly 8 months pregnant when he found her shooting up heroin behind a convenience store with her partner.

In body cam footage from the day, Holets is heard saying “Why do you have to be doing that stuff? It’s going to ruin your baby. You’re going to kill your baby.”
Holets says in a Facebook video that his initial response was anger, but when he looked beyond his first impression he saw something deeper.

“I saw more than an addict who didn’t care about anybody,” he said. “I saw a mother who loved her child, who was at the same time held captive and imprisoned by her addiction and she recognized that, and that affected me a lot.”

Holets says she shared with him that she was desperate to find someone to adopt her unborn child, and that’s when everything changed.

In his original interview, Holets says “I’ve gotten tired of seeing so many situations where I want to help but can’t and in that moment I realized that I had a chance to help.”

He continues, “I just felt God telling me, ‘Tell her that you will do it because you can. You can.'”

When the White House got wind of the story – Holets and his wife, Rebecca, were invited as Trump’s special guests at the State of the Union address Tuesday night.

The White House said in a news release Monday that Holets is “breaking down walls between drug addicts and police officers to help save lives.”

On Tuesday, the Holets sat right next to First Lady Melania Trump while the president told their story. Then, he addressed them directly.

“Ryan and Rebecca, you embody the goodness of our nation,” President Trump said.

But the story doesn’t stop there. After CNN first aired their story in December, support flooded in from across the country. A rehab center in Florida offered Champ and her partner, Tom, full scholarships to their facility.
Holets continues to follow their journey to recovery. The GoFundMe page he created aims to raise necessary resources to help the couple when they eventually leave the treatment facility.

“I’ve also kind of adopted Tom and Crystal, they’re like my brother and sister” Holets says. “Tom calls me every day to tell me how blessed he’s been but I’m the one that really feels blessed by Tom, by Crystal, by Hope. All three of them are just a massive blessing in our life.”