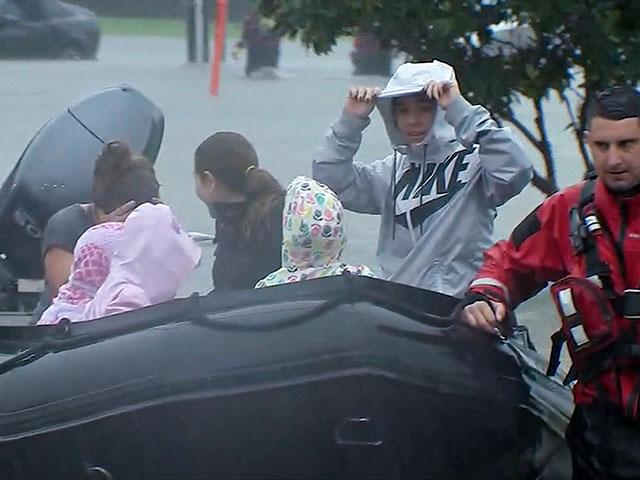 HOUSTON – Tropical Storm Harvey is being called a disaster of biblical proportions and it could eventually drop as much as an astounding 25 trillion gallons of water in Texas.

President Donald Trump is visiting Texas Tuesday to inspect the damage from this incredible storm that could end up being as expensive as Hurricane Katrina.

Harvey is still wreaking havoc on Houston, with more flooding expected. The storm is regaining strength after moving back into the warm waters of the Gulf, and forecasters say it won’t start moving to the northeast until Wednesday.

During this incredible tragedy, ordinary people have been going out of their way to help those in need.

The power of God is bringing people together in middle of this natural disaster.

As the rain continues, so do the rescues. People are using whatever they can from big trucks to even their own personal boats. They are trying to get people out of stranded cars and bring them to safety.

Life and death moments are taking place around the clock, with families fighting to stay above the more than 39 inches of rain that’s already fallen in some areas of Texas.

They’re floating on air mattresses, piling into canoes and rescue baskets from helicopters, and wading through the waist-deep waters.

CBN News caught up with three rescuers who say they are doing what God told them to do.

“We got three boats but we don’t know the area,” they said.

They’ve left the safety of their homes in Victoria, Texas, and driven up to the Houston suburb of Richmond to save lives.

“I think somebody has to be the first person to put their foot out and say we are going to take this initiative,” Reed Goodman said.

Goodman just moved here from North Dakota. He’s been looking for work the past five weeks and didn’t quite understand why nothing surfaced.

Now he realizes it was all part of God’s plan – a plan that included his father and brother taking their boat to Houston to save others from the rising flood waters.

“A lot of these things fall into place for a reason that we don’t understand. They have a rhythm and a motion that only God can put together,” he told us.

Reed’s brother, Robbin, said he felt like God was calling him to serve as well.

“I gave a call to my dad and said, ‘Where are you all?’ He said, ‘We haven’t left Victoria yet.’ I said, ‘Alright, I’m an hour behind you.’ They had the boat and I said I’ll be the driver,” Robbin recalled.

The group thought they would be camping and sleeping in their trucks.

But thanks to Texas generosity, people have opened their homes to give them food and shelter. Buzzy Wendtland is one of them.

“These mandatory evacuations happened about 8 to 10 hours ago and there is going to be a flood of people that need it. So opening the house up is the smallest thing we can do to help,” Wendtland said.

With nearly two more feet of rain expected on top of the 30-plus inches in some places, authorities worry the worst is yet to come.

Harvey’s been blamed for several deaths so far. It’s been reported six family members, two senior citizens and their four great-grandchildren, drowned when their van was swept away by floodwaters.

And Houston’s police chief fears there could be more.

“There is reality we have to come grips with, and that is we are just beginning the process of responding to this storm,” Texas Gov. Greg Abbott said.

City engineers released water from a pair of reservoirs to relieve pressure on older dams, but most of that water flowed directly into waterlogged neighborhoods.

CBN’s Operation Blessing is among the charitable organizations on the ground to help the victims in Texas.

“There is power in what we do, and so that is the greatest calling in what we have is to share in the love of Jesus,” Operation Blessing’s Jody Gettys said.

Meanwhile, Houston’s first responders and others are plucking thousands from the floodwaters, including this group of Good Samaritans from Victoria, Texas.