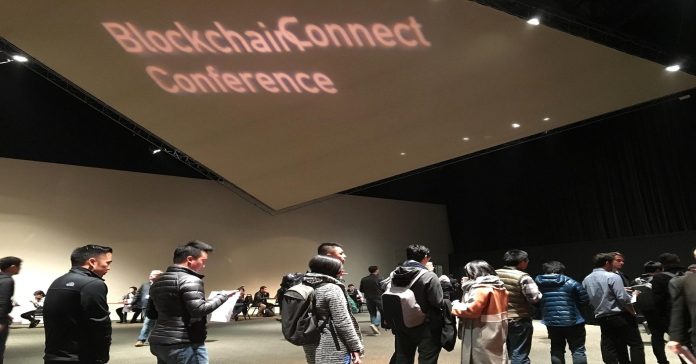 Near the entrance to the Palace of Fine Arts, a woman was handing out fliers promoting the initial coin offering for RecordGram, a project that’s aiming to put song rights on the blockchain. She was pitching to dozens of people who were trying to get into the Blockchain Connect Conference, but were held up because they first had to download the Eventbrite app to access their digital tickets.

That was just to get a temporary badge to get them in the door. From there, they had to stand in another long line on Friday morning and wait for their actual nametag.

Welcome to blockchain 2018, a chaotic mishmash of hardcore developers with wild ideas, nouveau investors with money to blow and overcrowded conferences with — at least in some cases — lousy logistical sense.

Blockchain Connect described itself as the “first U.S.-China blockchain conference,” and an event that would bring together “over 1,000 scientists, entrepreneurs, investors and developers from all over the world for a day of blockchain discussion.”

The problem for paying attendees is that they numbered well over 1,000. According to the website for the Palace of Fine Arts, the theatre holds 962 people. As of about 10:30 a.m., according to a person working the door, there were over 1,500 people on hand, with most paying between $500 and $1,000 for a ticket.

The exhibition hall doubled as a spillover room, where conferencegoers could watch sessions on a big-screen TV, though they were unlikely to hear much over the loud surrounding chatter. There was a curtained off VIP lounge for speakers and the press, but nobody was checking badges so anyone could enter. Inside, there were two TVs and equally bad acoustics.