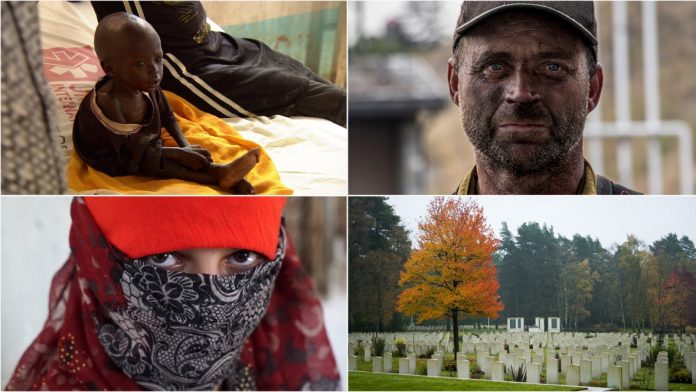 CBC went to dozens of countries, hundreds of Canadian communities and recorded countless hours of video to bring you the news in 2017. For the people capturing those images, there are particular moments that stand out above the rest.

Here are the most memorable images of the year, as selected by the videographers and photographers who shot them, along with their stories about what it was like being there.

Jean-Francois Bisson is a Toronto-based video producer who takes on assignments around world. This year, that included a trip to Ain Issa, Syria, where he and Adrienne Arsenault sat down with an ISIS bride. Her eyes still haunt him.

BEHIND THE LENS BISSON1:29

Richard Devey is a London-based camera operator and editor. He joined senior correspondent Margaret Evans to cover the famine in South Sudan. Amidst the suffering, he says the moment that stands out most is when a simple red plastic cup offered a glimmer of hope.

BEHIND THE LENS DEVEY1:26

Randall McKenzie has been a videographer in Yellowknife for almost 25 years. He knows the Northwest Territories’ communities, as well as the landscape. And he also knew a particularly special moment on the Mackenzie River Delta when he saw it.

BEHIND THE LENS MCKENZIE1:25

Susan Goodspeed is a videographer in Toronto. When assigned to a sit-down interview with immigrants from Zimbabwe, she followed her subjects’ lead and brought the audience into the room.

BEHIND THE LENS GOODSPEED 21:15

Glen Kugelstadt is a video producer in Vancouver who found himself in the line of fire in West Mosul this year — while his camera was running. Here’s what he filmed, and his account of how he felt.

Keith Whelan is a video producer in Toronto. When he joined Peter Mansbridge in Vimy Ridge to mark the 100th anniversary of the famous battle, one specific shot of the towering monument gave him chills.

BEHIND THE LENS WHELAN21:12

Evan Mitsui is a photographer for The National, based in Toronto. When a story’s central voice needed to remain anonymous, he found a way to make her portrait even more personal.

BEHIND THE LENS MITSUI1:42

Jared Thomas is a videographer based in London. While on a daily assignment, a bright colour in a solemn place caught his eye. He couldn’t leave without capturing it.

BEHIND THE LENS THOMAS1:10

Tina Lovgreen is one of the CBC Vancouver video journalists assigned to cover the wildfires last summer. She was on her way back to the newsroom when a firefighter at a gas station inspired her to unpack her gear and take one last shot.

Marc Robichaud is a camera operator and editor based in Ottawa. He — and his camera — were flies on the wall for a raw moment between the Prime Minister and a residential school survivor in Labrador.

Christian Patry is a videographer in Ottawa. When he and his team got sent to the U.S. border for news of the day, a big story unfolded unexpectedly right in front of them. Hear his account of being in the right place at the right time.

BEHIND THE LENS PATRY1:14

Jason Burles is a video producer in Washington. While on an assignment at the Mexico border in Texas, a dramatic scene unfolded in front of him. He was ready to capture it, here’s his story of what happened.

BEHIND THE LENS BURLES1:40

Sam Martin is a video producer in Edmonton. When he was covering a community graffiti event, the artists around him inspired his creativity.

BEHIND THE LENS MARTIN1:27

Ed Middleton is one of CBC’s licensed drone operators, based in Toronto. He took a lot of epic shots from the sky this year, but he says it’s the ones of Parliament Hill that stand out. It took six weeks to get permission to fly over the restricted airspace. The result was worth every phone call.

BEHIND THE LENS MIDDLETON21:21

Leonardo Palleja is a producer and videographer for The National, and in January, he captured an unforgettable image of a Somali man crossing the border from the U.S. to Canada in minus-17 weather to get refugee status.