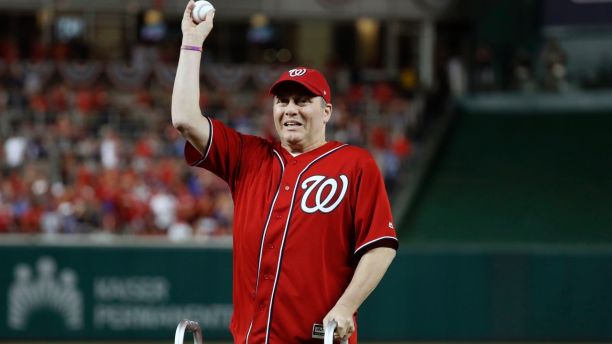 House Majority Whip Steve Scalise threw out the first pitch before Game 1 of the NLDS between the Washington Nationals and the Chicago Cubs Friday night.

Scalise used a walker to help him maneuver to a position a few feet in front of the pitcher’s mound at Nationals Park prior to Game 1 of the National League Division Series between the Nationals and Chicago Cubs.

Wearing a red Nationals jersey with his name and No. 3 on the back, Scalise poured in a strike to U.S. Capitol Police officer David Bailey.

Scalise, Bailey and two others were shot and wounded in June by a would-be assassin as Scalise practiced for the annual Congressional Baseball Game, which pits a team of Democrats against a team of Republicans and is held at Nationals Park.

Zack Barth and Matt Mika, the other shooting victims, were honored after the pitch.

Scalise made a triumphant return to the House floor last week, when he was greeted by yet another standing ovation.

“I’m a living example that miracles do happen,” Scalise, who spent more than a month in the hospital, said at the time.