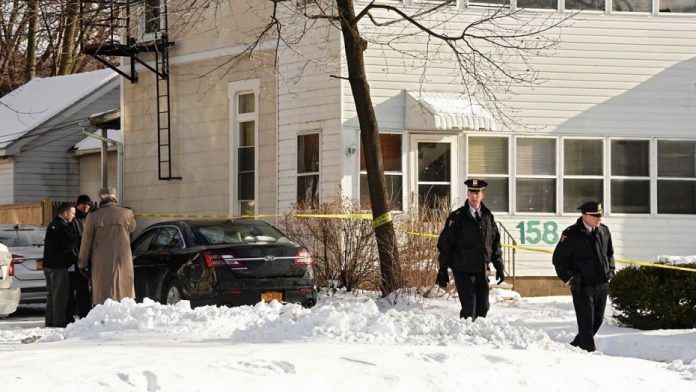 Police investigate the scene on on Tuesday, Dec. 26, 2017, in Troy, N.Y. after they say four people have been found dead and may have been killed in an apartment.

Police in upstate New York worked Wednesday to unravel the mystery behind the gruesome quadruple homicide that left a mother, her partner and two young children dead in a basement apartment the day after Christmas.

The bodies of a 36-year-old mother and her two children, an 11-year-old boy and a 5-year-old girl, were found dead in a basement apartment by the property manager in Troy. The body of a 22-year-old woman, who police say was in a relationship with the mother, was also found in the apartment.

Investigators have not revealed many details about the murders, including the identities of the victims or how they were killed.

But Troy Police Chief John Tedesco did give hint at the gruesomeness of the scene during a news conference.

“After being in this business for 43 years, I can’t describe the savagery of a person who would do this,” Tedesco said. “I don’t think there’s any doubt that a person who committed this crime is capable of anything.”

Police didn’t know when the slayings occurred, but Tedesco said he hoped autopsies being conducted Wednesday would provide clues. State police were involved in the investigation along with New York parole officials, Tedesco said.

“This will be a full-court press, if you will, until we bring someone to justice,” he said, adding that police were seeking any information the public may have about the crime.

Police cars blocked vehicles from approaching the home, which is set amid older, restored houses. Yellow crime tape was stretched across the street, running along the river’s east bank. Few people ventured out on the snow-covered sidewalks in temperatures in the teens.