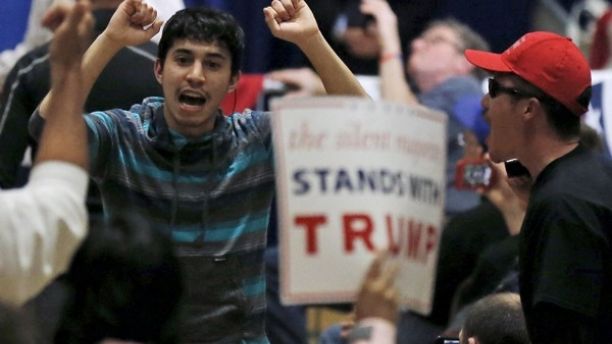 The Assembly Committee on Colleges and Universities approved the bill on an 8-6 vote. This sends the bill to the Assembly floor, which hopes to take it up in June, said Kit Beyer, a spokeswoman for Speaker Robin Vos, who is also one of the measure’s co-sponsors.

All six Democrats on the committee voted against the bill, warning it would chill free speech on campus and infringe on regents’ authority to govern their institutions themselves.

“The very bones of this legislation are diseased,” said Democratic Rep. Jimmy Anderson.

Under the bill, complaints from any two people about a UW System student’s conduct during a speech or presentation would trigger a hearing. Students found to have twice engaged in violence or disorderly conduct that disrupts another freedom of expression twice would be suspended for a semester. A third offense would mean expulsion. Complaints from any two people about the student’s conduct would trigger a hearing before a new UW Council on Free Expression. UW institutions also would be required to remain neutral on public policy controversies.

The measure comes as free speech issues have grown more contentious on colleges across the country, fostering concerns among Republicans that conservative speakers aren’t treated equally.

UW-Madison students in November shouted down former Breitbart editor and conservative columnist Ben Shapiro. The University of California-Berkley canceled a speech by conservative firebrand Ann Coulter in April due to security concerns. Protests broke out at that school in February ahead of a planned appearance by former Breitbart editor Milo Yiannopoulos. And fights broke out at New York University last year after protesters disrupted a speech by Gavin McInnes, founder of a group called the “Proud Boys” and a self-described chauvinist.

Conservative advocacy group Americans for Prosperity has registered in support of the bill. The League of Women Voters as well as PROFS, a group of UW-Madison faculty, and government watchdog group Wisconsin Democracy Campaign have registered in opposition.

Committee Democrats decried the bill as unconstitutional and predicted it would open the door to political witch hunts. Partisan operatives will attend presentations in pairs so they can file the requisite two complaints against students they disagree with, the Democrats said.

“Don’t you see a concern about two left-wing or two right-wing students raising an issue with perceived activity by students attending an event?” Hebl said. “Don’t you see the floodgates opening?”

Kremer asked Hebl if he had a better idea. Hebl responded that he couldn’t see any way to make the bill better.

Republican Rep. Travis Tranel told the committee he had heard from college students in his district that they’re afraid to express conservative views in class for fear the professor could dock their grades.

Hebl and fellow Democrat Terese Berceau both cut him off, challenging him to prove his anecdote was true. Hebl accused Tranel of making things up without any evidence, comparing him to Joe McCarthy, the Wisconsin senator who claimed he had built a list of Communists within the federal government in the 1950s.

Tranel said he could think of three individuals who had told him they were afraid to speak out in class.

“I couldn’t even get my comments out today without being interrupted,” Tranel said.