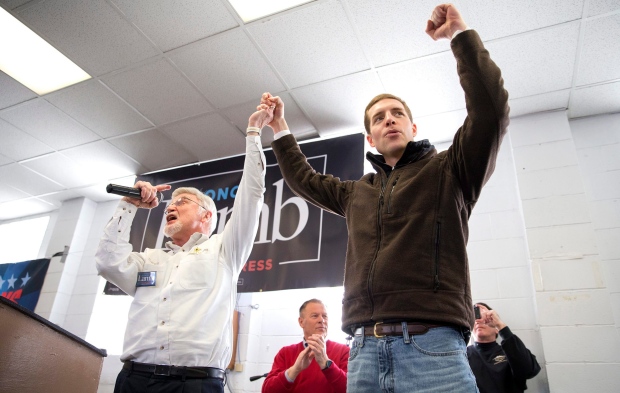 Pennsylvania’s crucial, too-close-to-call special election yielded no definitive winner early Wednesday morning. Not that it really matters either way. It’s already a dreadful outcome for Republicans now doubting whether they can hold the U.S. House of Representatives in the fall.

Even before the count is complete for the remaining 3,000-plus absentee ballots for Democrat Conor Lamb and Republican Rick Saccone, the toss-up special election in Pennsylvania’s 18th congressional district is an unnerving setback for Republicans, simply by virtue of this being a contest in the first place.

As Republican voters like Kevin Sheahen saw it, it was a race for both an open seat and for control of a political storyline. Sheahen, 63, worries about what a Saccone loss means for U.S. President Donald Trump’s ability to retain the lower chamber to “build a wall to protect our borders, vote no on chain migration, and help Americans with tax cuts.”

‘This fires up the Democrats’

“This fires up the Democrats. If they win 24 seats in the House, they get control,” said Sheahen, an engineer in a Pittsburgh suburb in Allegheny County. “Flipping those House seats from Republican to Democrat is what worries me. Democrats have the momentum working in their favour.”

Tuesday night’s race was widely viewed as a referendum on the president. For Republicans, nothing but a landslide Saccone victory would have alleviated anxieties of an impending blue wave and reaffirmed that sticking with Trump helps the party win seats.

Trump won the predominantly white and working-class voting district by nearly 20 points in 2016. Mitt Romney carried it by 17 points in 2012.

The district, which borders West Virginia, stretches over four counties, with a mix of coal and factory towns, rural farmland and affluent Pennsylvania suburbs. It has been solidly red for 15 years. In the last two elections, the Democrats, sensing no hope of winning there, didn’t even field a candidate.

‘This should be a wake-up call’

And yet, with all precincts reporting, Lamb had eked out a lead of fewer than 600 votes, though some absentee ballots were yet to be counted. Lamb declared victory early Wednesday, but Saccone has not conceded.

However it pans out, the margins have improved dramatically for Democrats since 2016. A 20-per-cent swing is nothing to sniff at, says Republican strategist Ford O’Connell, who knows Pennsylvania’s 18th well.

“This shows the Republicans what a tough climate they’re in,” O’Connell said. “We don’t know if it’s a blue wave, but one thing’s for sure: Republicans should certainly be scared.” 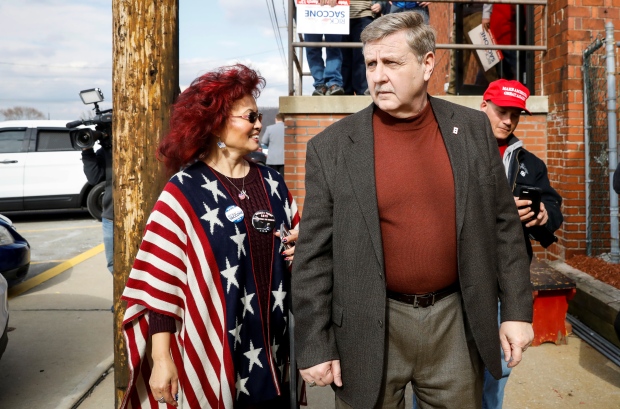 Saccone is seen during a campaign event at the Blaine Hill Volunteer Fire dept. in Elizabeth Township, Pa. Saccone was seen as a lacklustre candidate. (Brendan McDermid/REuters)

If Republicans weren’t panicking before, it’s time, he said.

“They need to be getting off their duffs, knocking on doors and dialling for dollars. Because this should be a wake-up call for Republicans that the House is in danger.”

The rise of Lamb, a 33-year-old former Marine and federal prosecutor who has never held political office, has made Democrats giddy about seeing the Trump resistance bear fruit.

They view his campaign as a possible winning formula for November’s midterm elections: fielding a moderate focused on local issues, with less political baggage. 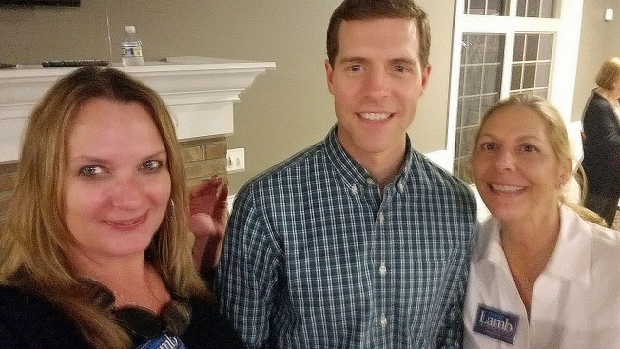 “It also means laying off Trump, which doesn’t mean they like him, or that they want him to win re-election, but leaving Trump off the table,” said Terry Madonna, director of Pennsylvania’s Center for Politics and Public Affairs at Franklin and Marshall College.

Lamb held off on nationalizing this election, avoiding negative mentions of a president who remains popular, particularly in the 18th district’s rural areas.

‘Trump before Trump was Trump’

Saccone was widely considered a lacklustre candidate who, despite having served in the Air Force and the Pennsylvania state house, lacked an aptitude for grassroots campaigning and fundraising. On his conservatism on social issues, he made flattering self-comparisons to the president.

“I was Trump before Trump was Trump,” he once declared. 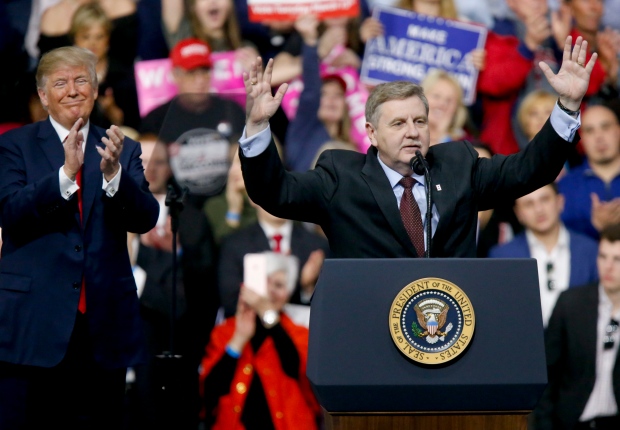 Saccone, right, acknowledges the crowd during a campaign rally with President Donald Trump in Moon Township, Pa. A loss in the district would be seen as a strong rebuke of the president. (Keith Srakocic/Associated Press)

He stood by last weekend as Trump stumped for him at a large rally, with the president all but setting Saccone up to accept all the blame for a possible loss.

“I hate to put this pressure on you, Rick. They’re all watching. Because I won this district, like, by 20 points,” Trump reminded him.

Democrat Nate Lerner, activist and co-founder of the Democratic Coalition, noted on Twitter that “no one had heard of Conor Lamb before January.”

“Democrats didn’t even have a candidate in Conor Lamb’s district in 2016,” he added in a tweet. “Then #TheResistance happened.”

With the polls still too early to call on Tuesday night, former Republican senator Rick Santorum made a prediction on CNN: “The reality is, there are going to be a lot more Conor Lambs on the ballot because Democrats are energized.”

Suppa, 53, voted for Lamb for his “positive campaign.” As with many Democrats, she’s already considering how this might improve prospects for retaking the House in November.

“This was a short election. It was quick. And if we can do this, in this quick amount of time, look at what we can do in November,” she said in a phone interview.

A rebuke of the president

As many as 119 other districts are more favourable to Democrats than the 18th. Democrats eyeing the House in the fall like those odds.

How the Democrats wiped out a more-than-19-point deficit in the voting district in 16 months is most impressive to Philip Harold, a political science professor with Robert Morris University in Moon Township, which is in the 18th district.

“A Conor Lamb victory is definitely a rebuke to the president. There’s just no other way to spin that.”

Whoever ends up winning will only serve out the remaining term for the former Republican incumbent, Tim Murphy, who occupied the seat before resigning over a sex scandal. Come November, the district will cease to exist in its current form due to redistricting.

“It’s basically both parties gunning for a huge talking point going into the midterms,” said O’Connell, the Republican strategist. “It sounds crazy to spend $10 million on a talking point, but if Democrats are looking for rocket fuel, this could be it.”