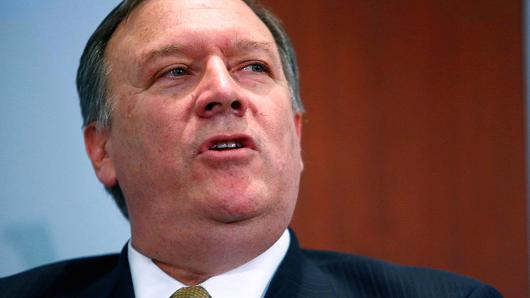 Pompeo, named secretary of state by Trump on Tuesday shortly after he announced Tillerson’s departure on Twitter, has taken a notoriously tough stance on Iran in the past in his erstwhile role as director of the CIA.

Not only has Pompeo likened Iran to the Islamic State (ISIS) militant group, calling the country a “thuggish police state” in a speech in October, he has also promised to constrain Iran’s investment environment and “roll back” its 2015 nuclear deal.

Showing his disdain for the internationally-brokered agreement, Pompeo said in October that the U.S. intelligence community and Treasury Department could make it harder for Tehran to meddle in regional affairs by exposing Iranian businesses that have ties to the nation’s elite security force.

The comment came shortly after Trump refused to certify the nuclear deal, marking the beginning of a campaign to toughen the terms of the agreement and rein in Iranian activities not addressed by the accord.

In November 2016, when Pompeo was appointed to lead the CIA, he warned that Tehran is “intent of destroying America” and called the nuclear deal “disastrous.” He added that he was looking forward to “rolling back” the agreement.