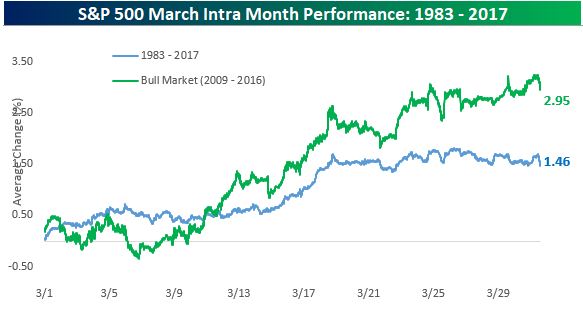 After a rough February, stocks are entering what are typically two of the best months of the year for the market.

The S&P 500 closed out the final day of February with a 1.3 percent loss to 2,744. For the month of February, it was down about 2.8 percent, relatively modest after the gut-wrenching decline of 10 percent from January’s highs in the first nine days of the month. Since Feb. 9, the S&P has sprang back 8.4 percent.

“March is actually a pretty good month. February on average is the third worst performing month for the S&P 500 going back to 1945,” said Sam Stovall, chief investment strategist at CFRA.

Strategists said stocks could do better in March, but the challenge will be continued volatility around rising interest rates and the fear of inflation. The Federal Reserve is expected to raise interest rates March 21 and release new forecasts for inflation and interest rates that could signal more hikes than currently expected.

Stocks fell hard on those concerns Tuesday, after Fed Chair Jerome Powell, in his first public appearance, said the Fed could see a reason to raise interest rates more than its current forecast. That sent bond yields higher, and stocks tumbled, falling into the market close. Powell testifies on the economy before a second Congressional panel Thursday.

“Fed Chair Powell said he’s going to maintain former Fed Chair Yellen’s policies and he’s going to push interest rates higher. I think what happened was we just went up so fast yesterday and Friday, you could almost say people are looking for any reason to take some profits short term,” Stovall said.

Stovall said stocks were higher in March about two-thirds of the time going back to 1945, and in April, even more at 69 percent. April is historically the second best month of the year on average, with a gain of 1.4 percent, and March is the third, he said.

Paul Hickey, co-founder of Bespoke, said since the start of the bull market nine years this March, the gains in the month of March for the S&P 500 have been just under 3 percent, double the normal average for March. For the index, going aback to 1983, the gains averaged 1.5 percent in March.

As February was getting set to exit, the focus is on whether stocks have found a bottom or whether there will a ‘W’ shaped move, as opposed to the current ‘V’ shaped bounce.

Stovall said the market has avoided retesting lows but that could be a set up for another correction later on.

Traders are watching the 2,730 level on the S&P 500, which is a key support level. Scott Redler of T3Live.com said if that level fails, the market could be headed to 2,700. If it breaks through there, that could mean there would be a retest of the February low of 2,535, he said.

“2,701 is the big line in the sand. If it closes below that, people would lose their conviction that they would have to buy the dip,” said Redler. He said a 2.95 percent level on the 10-year yield is also an area that could spook stocks. The 10-year rose to as high as 2.92 percent after Powell’s comments Tuesday.

Despite the good performance in March historically, Hickey found a warning in his research of the market performance dating back to 1983. In the five years, where the S&P had a higher January and then fell in February, March averaged a decline of 0.8 percent. The most common combination was the 17 times that both January and February were higher, paving the way for an average monthly gain of 1.3 percent in March in those years.

In the seven instances where both January and February were lower, March performed best, averaging a 4.3 percent spring back in the S&P. One of those years was the tech bubble of 2000, when March was up 9.7 percent, the best performance since 1983. March of 2009 was second best, with a gain of 8.5 percent.

But Hickey said this March could be positive. “Coming into the year, sentiment was really strong. In January, it got even stronger. The pullback in February was a sort of reality check, and that brought peoples’ expectations back to reality. That’s helpful,” he said.

“In the short term, the market has these little jitters, but in the past nine years, we’ve seen rates spike up and the market was able to handle it,” he said. “The party can still go on, but the later it gets, the sloppier it gets.” 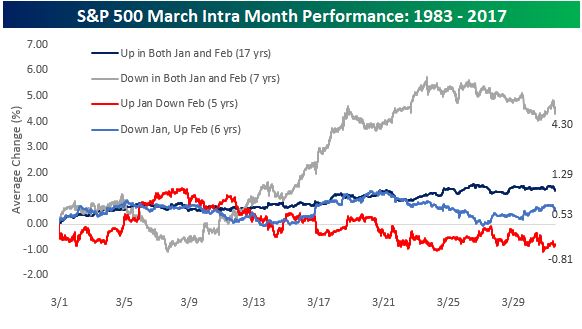