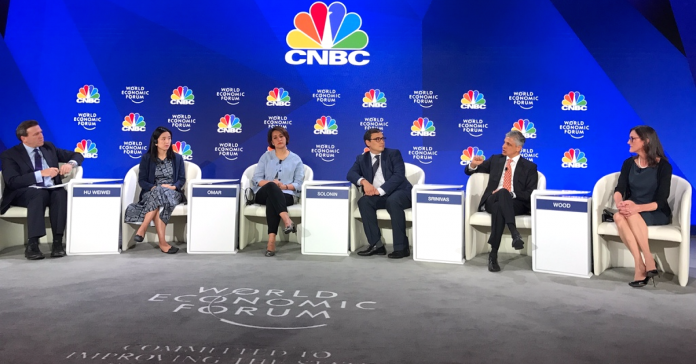 But the fintech industry will not be able to continue developing at its current rapid pace without the presence of banks, said Sergey Solonin, chief executive officer of Qiwi.

To be sure, over the last several years, banks have invested in new technologies, including blockchain and cryptocurrencies, as well as fintech start-ups.

“We see that without banks being good platform for fintechs, for newcomers, it will be difficult to develop at the pace we see right now,” he said. “Banks do invest a lot of money into fintechs right now. And also because of some regulatory issues that we face, I think we’ll still see some disruption on the market, but the weight now, it moves towards collaborative forms for fintechs with banks, instead of being just disruptive.”

Emerging economies, according to Wood, have an advantage when it comes to adopting fintech because much of the legacy infrastructure seen in the West — such as credit cards and bricks-and-mortar bank outlets — are not as prevalent. This enables countries such as China to leapfrog some of the old ways of doing things.

“It’s much easier for fintech, or tech-fin, as the head of strategy at Ant Financial said yesterday, to happen here, because tech is the operative word —and tech means declining cost curves and that enables more activity,” said Wood.

PCCW’s Srinivas added that while getting companies to give up, or upgrade, their legacy infrastructure in favor of new technologies is a challenge, another difficulty lies in the existing corporate mindset.

“The change will not happen because they have to cannibalize their current businesses,” he said, referring to banks as an example. “That’s a massive disruption that banks will have to go through.”

Wood added that companies’ ability to change their mindset may define their ability to survive in the long term.

She pointed to the words of Klaus Schwab, the founder and executive chairman of the World Economic Forum: “It used to be that the big used to eat the small, now it is the fast eat the slow and I’m seeing it everyday.”