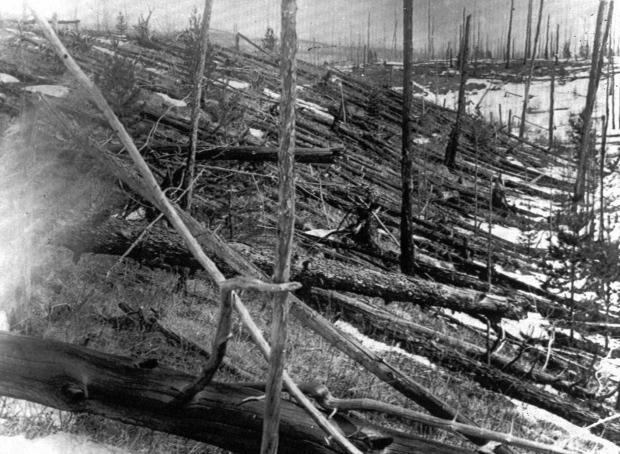 “Suddenly in the north sky … the sky was split in two, and high above the forest the whole northern part of the sky appeared covered with fire,” one eyewitness recounted in 1927.

“At that moment, there was a bang in the sky and a mighty crash…. The crash was followed by a noise like stones falling from the sky or of guns firing. The earth trembled.”

This was the renowned Tunguska event, the most recent devastating case of an asteroid colliding with Earth.

The intense heat, together with the speed, generated intense air pressure that caused the asteroid to break apart. It left a bright fireball that one witness 64 kilometres away said made him feel like his shirt was on fire.

In the end, 2,072 square kilometres of forest were destroyed and 80 million trees levelled.

In this 1953 file photo, trees lie strewn across the Siberian countryside 45 years after a meteorite struck the Earth near Tunguska, Russia. (Associated Press)

Though the Tunguska event was tragic for wildlife and the area’s forests, fortunately no one was killed, as it exploded over a remote area. But could one that’s big enough wipe us out?

Thanks to a number of asteroid surveys, such as NASA’s Center for Near Earth Object Studies, there is a healthy inventory of large asteroids.

“We’ve found 95 per cent of all the really big, one-kilometre-sized asteroids,” said Peter Brown, professor of physics and astronomy at Western University in London, Ont.

“We’re going to know within the next couple of decades for sure if any time over the next century if there’s an asteroid that’s going to hit.”

Of course, there can’t be an absolute guarantee that a smaller asteroid wouldn’t impact Earth.

We got a dose of what a smaller one could do on Feb. 15, 2013 when a 20-metre piece of space rock exploded in the atmosphere over Chelyabinsk, Russia. Two minutes after it passed, an air blast shattered windows, injuring almost 1,000 people. Travelling nearly 70,000 km/h, it released energy equivalent to 30 Hiroshima bombs.

You can hear it in the video below.

One of the most talked-about asteroids of late is known as Apophis. This 300-metre-wide asteroid will come within 31,000 kilometres of Earth on April 13, 2029 (yes, it’s a Friday). While there’s no risk of it entering Earth’s atmosphere, it’s certainly a close shave. It’s so close that tides will exert a pull on it as it hurtles by.

‘You shouldn’t be losing sleep over it.’
– Peter Brown

What scientists don’t know, however, is how that close pass will affect its orbit. It will pass us again on April 13, 2036.

Still, astronomers estimate that the chance is one in 100,000 that it will collide with Earth. While that may not sound so reassuring, let’s put it this way: astronomers are 99.99911 per cent sure it will never impact us.

So while we can’t entirely rule out the possibility that a small asteroid may enter our atmosphere and cause some injuries, there’s no reason to worry, Brown said.

“There certainly is a risk from asteroid impacts; it’s the only natural risk that we as a species have the ability to predict well in advance and mitigate against, entirely,” said Brown. “But I want people to keep it in context. You shouldn’t be losing sleep over it.

“There will be, some time within the next five to 10 years, an asteroid discovered, very small, that will impact the Earth, and we’re going to know about it a day or two in advance,” Brown said.

But, he said, it won’t pose much of a threat. It could be simply broken windows. 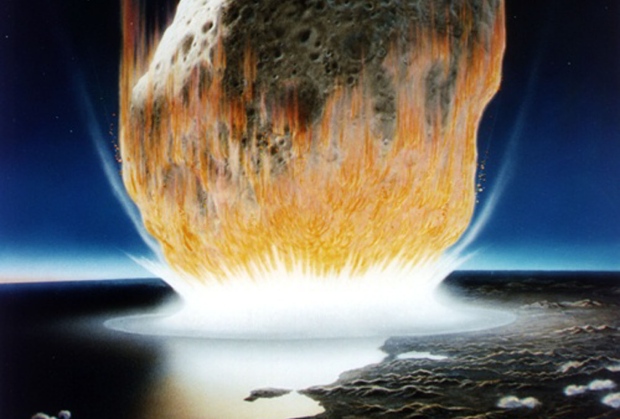 This artist’s conception shows an asteroid crashing into Earth in an event that scientists believe occurred in the Caribbean region at the boundary of the Cretaceous and Tertiary periods in Earth’s geologic history about 65 million years ago causing the extinction of dinosaurs. But this is something that’s unlikely to occur again. (Reuters)

And while there are no Armageddon-like plans to blow up an asteroid yet, organizations conduct practise exercises to plan for one colliding with Earth.

The Chelyabinsk event also heightened awareness that Earth exists in a cosmic shooting gallery. Our solar system is full of leftover debris — big and small — from its creation. It was the worldwide coverage of Chelyabinsk — the most documented impact ever — that was the impetus for Asteroid Day.

Its creators wanted to increase awareness about the real threats to our planet and initiatives that were being undertaken to prevent or track potentially hazardous objects.

The day is marked every June 30 and has even been recognized by the United Nations Office for Outer Space Affairs.

The key, both Murphy and Brown said, is to not panic and realize that there are people working on it. No big ones are likely to slam into Earth and wipe us out.

And if you read about an asteroid that’s going to impact Earth, check your sources. NASA and other space agencies are reliable. Independent sources or blogs are not.

“The biggest danger is hype and people becoming scared over a non-lethal impact,” Brown said. “If it is really something to be concerned about, it will be well-known, well-publicized and unambiguous, and it won’t be on some website in eastern Europe.”