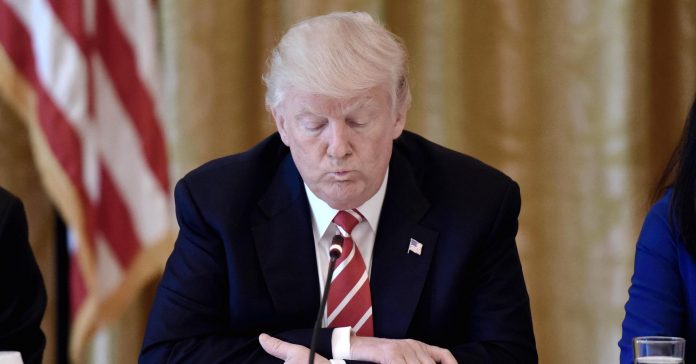 President Donald Trump‘s administration is preparing an executive order that will require all U.S. food aid to be transported on American ships, according to four sources with knowledge of the deliberations.

Currently, 50 percent of such aid must be transported on U.S.-flagged vessels. The sources said Trump is considering going as far as doubling that to 100 percent, a move likely to stir opposition from both Republicans and Democrats.

“An executive order is being drafted by the White House,” one source with knowledge of discussions told Reuters, adding that it was being discussed among government lawyers.

Although unlikely to have any significant effect on the $4 trillion global cargo shipping industry, the initiative touted as part of Trump’s “America First” platform may slow food aid getting to millions of people and do little to create jobs, critics said.

Aid groups, and members of Congress from both parties have been working for years to lower, or eliminate, the 50 percent shipping requirement. The United States, the world’s largest provider of humanitarian assistance, spent about $2.8 billion on foreign food aid in 2016. About half of that is estimated to go to shipping and storage.

The conservative-leaning American Enterprise Institute said in a November report that shipping food aid on U.S.-flagged vessels costs 46 percent more than aid shipped at internationally competitive rates and can take as much as 14 weeks longer.

Supporters say Trump’s initiative would not only create new U.S. jobs in the shipping industry but that U.S.-controlled food shipments are important for national security because the U.S. fleet could be transferred to the military in case of a conflict.

Critics argue the order would create few, if any, jobs. Food aid is a very small percentage of the worldwide sea cargo flow, while the security issue is moot as most cargo ships are too slow for use by the 21st century military.

A spokesman for USAID, which oversees U.S. humanitarian programs, declined to comment, referring the question to the White House.

Natalie Strom, a spokeswoman for the White House said, “We don’t comment on any potential EO’s (executive orders) that may or may not be in the works.”

Trump has submitted a budget outline that proposed steep cuts in spending on foreign aid, which accounts for just 1 percent of all U.S. spending. Members of Congress from both parties said they opposed that plan.

With the world facing four potential famines, and struggles to care for millions displaced by conflicts in Syria, Iraq and Afghanistan, critics have been pushing to eliminate what they see as an unnecessary regulation that already adds $50 million a year to the cost of providing aid.

Tom Hart, North America executive director at The One Campaign, a non-profit group co-founded by U2’s Bono to fight poverty, said the regulation would hinder getting life-saving food assistance to the people Americans are trying to help.

“Millions of people could be denied the food aid they need to survive if the cargo preference requirement is doubled,” said Hart.

Senator Bob Corker, the influential Republican chairman of the Senate Foreign Relations Committee, has been an especially vocal critic of the shipping requirement.

He and another committee member, Democratic Senator Chris Coons, have filed legislation to ease the requirement.

After hearing about the potential order, senators from both parties called senior administration officials to let them know this would not be supported in Congress, a Senate aide told Reuters.

“They’ve been warned,” the aide added.