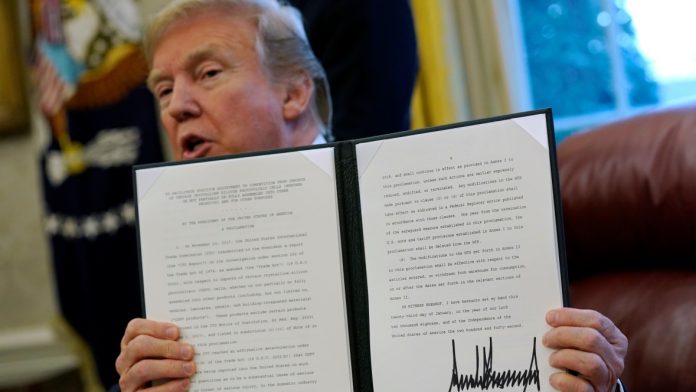 U.S. President Donald Trump has signed off on a report clobbering his own views on trade.

He’s even signed the opening passage, a foreword to the 2018 “White House Economic Report of the President.”

The annual report from the White House contradicts a number of trade statements and policies already articulated by Trump.

One example involves the supposed trade deficit with Canada: Trump keeps insisting it exists, but the document he signed states Canada is among the few countries in the world with whom the U.S. runs a surplus.

The report also contradicts the president by saying trade has helped the U.S. economy grow and that economies are shifting away from manufacturing. It also sings the praises of foreign relationships and the American record in international dispute panels, and argues that reworking trade agreements is no way to address a trade deficit.

The 563-page document was produced by Trump’s council of economic advisers. Meanwhile, there are reports in U.S. media that Trump is looking to promote trade hawk Peter Navarro to a more prominent position in the White House.