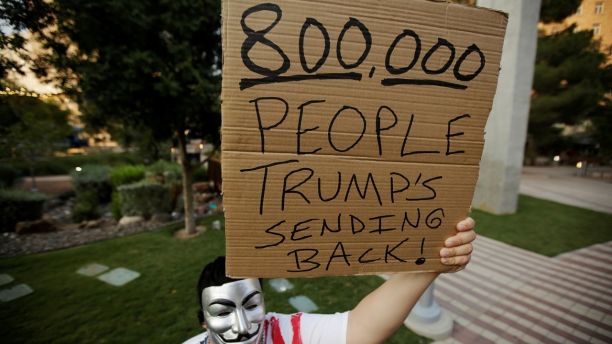 President Trump and lawmakers are still struggling to come up with a plan for the hundreds of thousands of young, undocumented immigrants living in the United States.

In September, the Trump administration announced its plan to phase out the Deferred Action for Childhood Arrivals program (DACA) – which provides a level of amnesty to certain undocumented immigrants, many of whom came to the U.S. as children – with a six-month delay for recipients.

Trump set a deadline of March 5 as the end date for the DACA program, but a lower court ordered the administration to continue to accept renewal applications indefinitely. The U.S. Supreme Court declined in late February to take up the administration’s request for an appeal of the order that requires the continuing acceptance of renewal applications.

The Department of Homeland Security has confirmed that it is continuing to process renewal requests but is not accepting new ones.

Here’s a look at the DACA program and why the Trump administration wants to dismantle it.

The DACA program was formed through executive action by former President Barack Obama in 2012 and allowed certain people who came to the U.S. illegally as minors to be protected from immediate deportation. Recipients, called Dreamers, were able to request “consideration of deferred action” for a period of two years, which was subject to renewal.

“Deferred action is a use of prosecutorial discretion to defer removal action against an individual for a certain period of time,” U.S. Citizenship and Immigration Services stated. “Deferred action does not provide lawful status.”

Individuals also had to have a high school diploma, GED certification, been honorably discharged from the military or still be in school. Recipients could not have a criminal record.

It did not provide “legal status.”

Thousands of people could lose their jobs if the DACA program is rescinded permanently, according to a study by left-leaning think tank Center for American Progress.

What did the Trump administration do?

While the courts’ decisions have relieved much of the urgency surrounding the March 5 deadline, there are nearly 22,000 people whose initial applications have yet to be decided and are at risk until their petitions are granted.

DHS confirmed that it is still processing renewal applications as normal but is not accepting new DACA applications from individuals who did not already have it, the department said in a statement.

Since the announcement, Trump has offered to work with lawmakers on a solution for the hundreds of thousands of people in the U.S. who fell under DACA’s umbrella of protections. But he has also repeatedly blamed Democrats on social media for lack of a solution.

Earlier this year, Trump released his “four pillars” of immigration reform, which included a provision for legal status for DACA recipients and others who would be eligible for DACA status. The White House estimated that total to be 1.8 million people. The Senate rejected the plan.

Republicans – and some Democrats – opposed Obama’s directive establishing DACA from the start as a perceived overreach of executive power.

Obama spoke out on social media after the Trump administration announced a plan to dismantle the program, stating that it’s “self-defeating … and it is cruel” to end DACA and questioned the motive behind the decision.

Despite some rumors circulating online to the contrary, Dreamers were eligible to serve in the U.S. military since 2014 when the Pentagon adopted a policy to allow a certain amount of undocumented immigrants to join.

In fiscal year 2016, 359 DACA recipients had enlisted in the Army – which is the only branch to accept immigrants of this category.

A Department of Defense official said in April that the military would continue to accept noncitizen recruits, but it is unclear if that will continue to be the case.

Fox News’ John Roberts and The Associated Press contributed to this report.