Alabama man William West, 44, has been arrested for allegedly using a bottle of Lucid Absinthe in the blunt-force slaying of his wife, Kat West, who led a provocative double life.

Details about the January death of Kathleen Dawn “Kat” West were made public Friday, one day after her husband, William “Jeff” West, 44, was jailed in connection with the case, AL.com reported.

A report by TV’s “Inside Edition” described some key surveillance footage showing the couple laughing and shopping at a liquor store some eight hours before the discovery of the body. 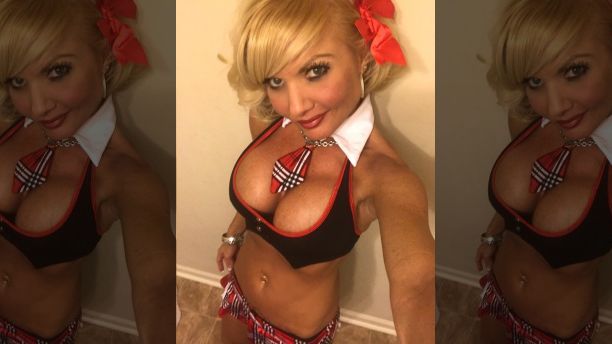 The pair bought Lucid Absinthe and a bottle of Jameson Irish Whiskey, according to AL.com.

As two left the store, Jeff West is seen on the surveillance footage patting his wife’s backside.

The bombshell blond, reportedly wearing only a sports bra, was found dead lying face down across the street from her home early in the morning of Jan. 13 when a neighbor left for work.

A cellphone with a green bottle was found near the body, and witnesses said the scene appeared staged, AL.com reported. Lucid Absinthe bottles are green.

“I was scared and I started crying,” the 19-year-old fast food worker who discovered the body told AL.com. “I was upset for a long time after that.”

Police would not say what might have precipitated a fight between the Wests, but told reporters that domestic violence incidents can occur quickly.

Kat West touted herself on social media as a stay-at-home mom but had a subscription-only website, where she went by the name Kitty Kat West, according to news reports.

Her Twitter and Instagram accounts, which appeared under the same tittilating name, featured revealing photos of West, who by many accounts had a deep fascination with screen seductress Marilyn Monroe, and directed viewers to a paid adult website of sexy selfies.

Jeff West is former military, AL.com said, and he now works as an unsworn police officer at Birmingham Southern College in the campus police department, where he has been on leave since his wife’s slaying.

AL.com quoted college officials as saying he is in the process of being fired.

The Daily Mail said West has insisted that his exhibitionist wife died as a result of a “boozy accident.”