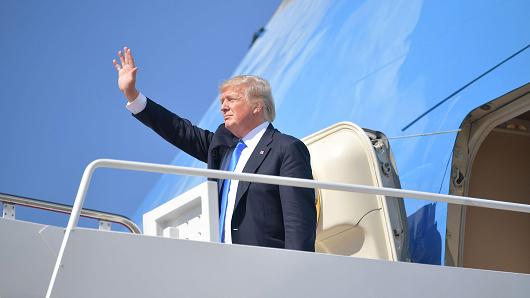 U.S. President Donald Trump makes his way to board Air Force One before departing from Andrews Air Force Base in Maryland on June 9, 2017.

A trip to Poland by U.S. President Donald Trump next week may feel like a diplomatic coup for the right-wing government, but western European nations are uneasy it will encourage Warsaw’s defiance towards Brussels.

Trump visits Poland for one day – en route to a G20 summit in Hamburg, Germany – to take part in a gathering of leaders from central Europe, Baltic states and the Balkans, an event convened by Poland to bolster regional trade and infrastructure.

Brussels diplomats view the July 6 gathering, dubbed the Three Seas summit because the countries involved border the Baltic, Black and Adriatic seas, as a Polish bid to carve out influence outside the European Union with which the nationalist government has repeatedly clashed.

Most diplomats in Brussels dismiss the importance of the Three Seas project, co-hosted by Croatia, but are wary over Trump’s high-profile visit to participate in a project one senior EU official called Poland’s push towards “self-ghettoisation”.

“One cannot but feel a bit suspicious if it isn’t an attempt to break up European unity,” another EU diplomat said about the Three Seas project.

Poland’s ruling Law and Justice (PiS) party has played a major role in fuelling a deepening rift between ex-communist and Western members of the European Union, at a time when the bloc is struggling with the aftermath of Britain’s decision to leave.

Since winning a parliamentary election in 2015, the PiS has angered France over a canceled army procurement deal, brought relations with Germany to their worst in nearly a decade, and is facing EU action over what critics call its authoritarian tilt.

Poland is one of the leading voices in the region against migration, a view it shares with Trump alongside a disregard for climate change and suspicion of international bodies.