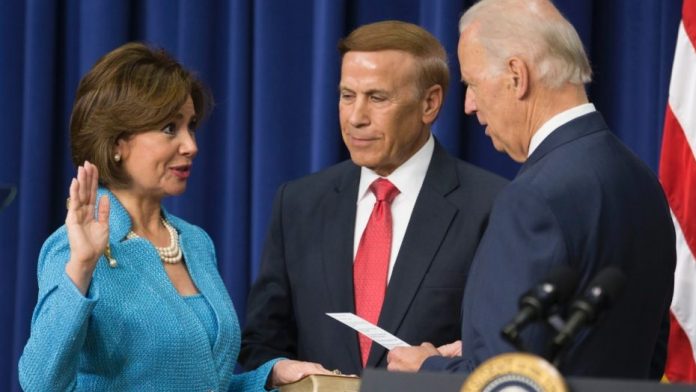 Maria Contreras-Sweet is sworn in as administrator of the Small Business Administration by then-Vice President Joe Biden in 2014.

A former member of the Obama administration is close to acquiring Weinstein Co., the financially troubled studio of disgraced Hollywood executive Harvey Weinstein, according to a published report.

A bid by Maria Contreras-Sweet, who led the Small Business Administration under President Barack Obama, is said to have the inside track, the Los Angeles Times reported.

The bid — with backing from billionaire Ron Burkle and the Dallas-based private equity firm Lantern Asset Management — includes a cash infusion of $30 million and the assumption of hundreds of millions of dollars in debt, Variety reported.

The process to sell the film company began shortly after allegations surfaced that Weinstein had sexually harassed or assaulted dozens of women. Weinstein was dismissed from the company in October.

Contreras-Sweet’s bid, which first emerged in November, is not the only one being considered. Other entities said to be interested include Lionsgate and Killer Content, a New York-based production company, the Times reported.

But directors of the Weinstein Co. are said to be most interested in Contreras-Sweet’s bid, according to the Times.

“I believe we have now reached a crossroads where it is imperative that a woman-led board acquire control of the company and create content that continues to inspire audiences around the world, especially our young girls and boys,” Contreras-Sweet wrote, according to the Times.

Contreras-Sweet was born in Mexico and came to the United States with her family when she was 5. She has experience in both the public and private sector, including 15 years at the 7Up-RC Bottling Co. as well as serving in the administration of former California Gov. Gray Davis.