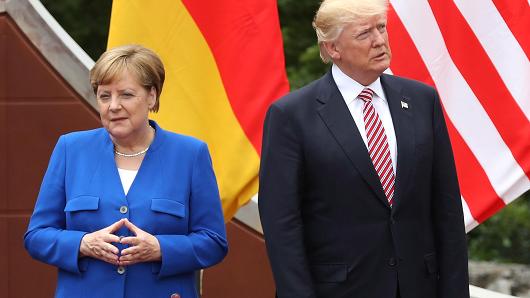 German Chancellor Angela Merkel and U.S. President Donald Trump arrive for a group photo at a G7 summit on May 26, 2017 in Taormina, Italy.

The United States has signaled that it could discontinue multilateral cooperation on financial market regulation and tax havens ahead of a G-20 summit in Germany next week, weekly magazine Der Spiegel reported on Friday.

Without citing its sources, the magazine also said that the administration of U.S. President Donald Trump was threatening to slap tariffs on dozens of European products if Europe did not open its market to U.S. hormone-fed meat.

The German government was not immediately available to comment on the report. G-20 countries began coordinating on financial regulation and tax matters after the global financial crisis of 2008-2009.

The trip amounts to a last-ditch bid to overcome differences on trade and climate change ahead of the G-20 summit in Hamburg, which will be held from July 7-8.

Merkel acknowledged in a speech in the German lower house of parliament that there were stubborn differences with the Trump administration on trade and climate.

Trump announced earlier this month that he would pull the United States out of a landmark international agreement to fight climate change. His administration is also threatening punitive trade measures on steel ahead of the G-20 summit.