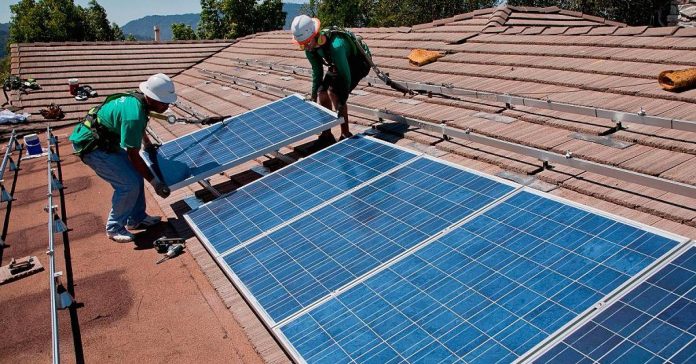 The U.S. solar industry installed 10.6 gigawatts (GW) of new photovoltaic capacity in 2017, according to a study.

That number, while still considerable, represents a 30 percent fall year-on-year from 2016, when a staggering 15 GW was installed.

The figures come from the U.S. Solar Market Insight Report 2017 Year-in-Review, put together by GTM Research and the Solar Energy Industries Association (SEIA). Photovoltaic, or PV, refers to a way of directly converting light from the sun into electricity.

“The solar industry delivered impressively last year despite a trade case and market adjustments,” Abigail Ross Hopper, the SEIA’s president and CEO, said in a statement Thursday. “Especially encouraging is the increasing geographic diversity in states deploying solar, from the Southeast to the Midwest, that led to a double digit increase in total capacity.”

The non-residential market grew by 28 percent year-on-year, the fourth year in a row it has recorded annual growth.

The residential and utility-scale sectors, however, saw installations fall. Breaking the figures down by states, California and North Carolina maintained their position as solar powerhouses in the U.S., installing the largest and second largest amount of capacity respectively.

The SEIA said that total installed U.S. PV capacity was set to more than double over the next five years.

The tariff for solar cells and modules will last for four years. In year one it will be 30 percent, and will then decrease by 5 percent each year, reaching 15 percent in year four.

After that decision was announced, the SEIA said it would effectively “cause the loss of roughly 23,000 American jobs this year, including many in manufacturing.”

“There are already more jobs in renewable energy than there are in coal, so when Trump is putting a tariff barrier on solar panels… not only is he making it more difficult for America to meet our climate obligations but, actually, it’s a job destroyer because the real sectors of the future are in renewable energy, like (the) installation of solar panels,” Stiglitz said.