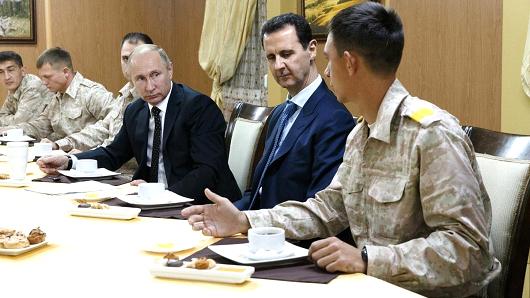 Russian President Vladimir Putin (3 R) meets with President of Syria, Bashar al-Assad (2 R) during his visit at the Hmeymim base in Syria’s Latakia on December 11, 2017.

The U.S. Department of Defense has hit back at Russian claims that the U.S. military is about to launch missile strikes on government-held districts in Syria’s capital Damascus.

A spokesman for the department told CNBC Tuesday that Moscow is complicit in its ally and Syrian President Bashar Al Assad’s crimes in the war-torn country.

“We urge Russia to stop creating distractions and compel the Assad regime to stop brutalizing innocent Syrian citizens and allow much-needed aid to reach the people of East Ghouta and other remote areas,” the spokesman said.

“By enabling the Assad regime’s brutality, Russia is morally complicit and responsible for Assad’s atrocities. It is impossible to ignore the growing body of evidence that Syria is continuing to use chemical weapons on its own people — a clear violation of international law.”

Earlier Tuesday, the Russian military threatened action against the U.S. if it led airstrikes on Damascus. Valery Gerasimov, chief of the general staff of the armed forces of Russia, was widely reported as saying Moscow had “reliable information” about militants preparing to falsify a government chemical attack against civilians.