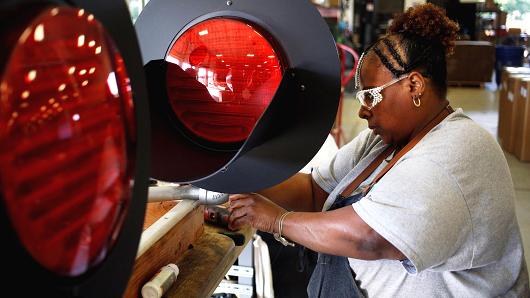 U.S. economic growth slowed slightly more than initially thought in the fourth quarter as the strongest pace of consumer spending in three years drew in imports and depleted inventories.

Gross domestic product expanded at a 2.5 percent annual rate in the final three months of 2017, instead of the previously reported 2.6 percent pace, the Commerce Department said in its second GDP estimate on Wednesday. That was a deceleration from the third quarter’s brisk 3.2 percent pace.

The downward revision to the fourth-quarter GDP growth estimate largely reflected a smaller inventory build than previously reported. It was in line with economists’ expectations.

The economy appears to have lost further momentum at the start of the year, with recent data showing retail sales, home sales, durable goods orders and industrial production declining in January. In addition, the goods trade deficit widened last month as exports fell.

First-quarter growth tends to be weak because of a seasonal quirk but is likely to accelerate for the rest of 2018 as the stimulus from a $1.5 trillion tax cut package and increased government spending kicks in. GDP growth estimates for the first three months of the year are as low as a 1.8 percent rate.

Fed Chairman Jerome Powell struck an upbeat note on the economy before lawmakers on Tuesday, saying “my personal outlook for the economy has strengthened since December.” That prompted traders to raise their bets on four rate increases this year.

The Fed has forecast three rate hikes and financial markets expect the first increase in March.

The economy grew 2.3 percent in 2017, an acceleration from the 1.5 percent logged in 2016. A measure of domestic demand expanded at its quickest since the third quarter of 2014, highlighting the economy’s strength.