President Donald Trump speaks alongside Secretary of State Rex Tillerson (L) during a Cabinet Meeting in the Cabinet Room at the White House in Washington, DC, December 20, 2017.

The United States Dollar Index, which measures the greenback vs. a basket of other currencies, fell immediately after the report. 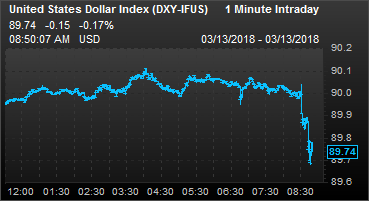