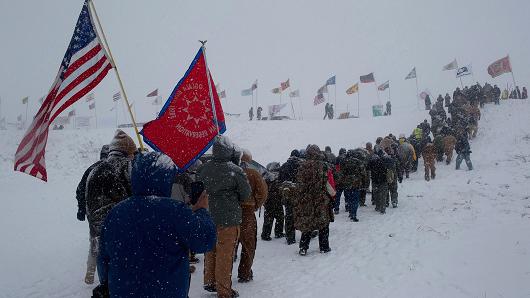 Hundreds of United States military veterans vow to defend the Standing Rock protest camp and march through a winter blizzard to the scene of recent clashes with state police and the national guard just outside of the Lakota Sioux reservation of Standing Rock, North Dakota, December 5, 2016.

The United States Army Corps of Engineers on Tuesday said in a court filing it intends to grant an easement needed to complete the hotly disputed Dakota Access pipeline.

The Corps also said it would terminate its plans to prepare an Environmental Impact Statement. This comes after President Donald Trump last month signed a presidential memo that asked the Army to expedite that process and move forward the project.

The move is almost certain to spark a legal battle and could lead to clashes at camps near Cannon Ball, North Dakota, where hundreds of protesters are still camped out in opposition to the project.

Members of the Standing Rock Sioux and other tribes, as well as environmentalists from around the country, have fought the pipeline project on the grounds that it crosses beneath a lake that provides drinking water to Native Americans. They say the route beneath Lake Oahe puts the water source in jeopardy and would destroy sacred land.

In December, the Corps said it would deny Dallas-based Energy Transfer Partners the easement it needs to complete the final stretch of the $3.7 billion pipeline. United States Assistant Secretary of the Army Jo-Ellen Darcy said the best path forward was to explore alternative routes for the pipeline through an environmental review. 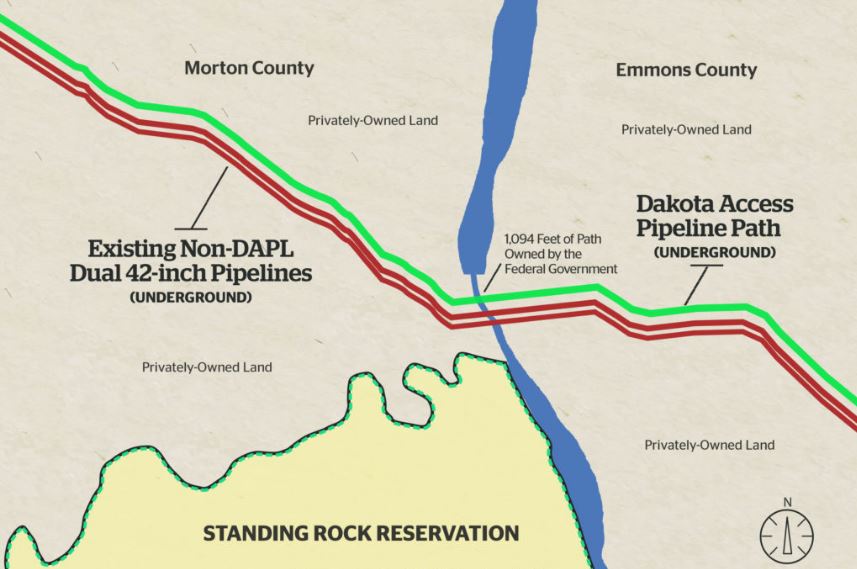 The Standing Rock Sioux vowed to sue if the Corps suspends the environmental review that Darcy announced.

“To abandon the EIS would amount to a wholly unexplained and arbitrary change based on the President’s personal views,” the Sioux said in a statement last week.

“We stand ready to fight this battle against corporate interest superseding government procedure and the health and wellbeing of millions of Americans.”

The response from opposition groups on Tuesday was swift.

“The granting of an easement, without any environmental review or tribal consultation, is not the end of this fight — it is the new beginning. Expect mass resistance far beyond what Trump has seen so far,” the Indigenous Environmental Network said in a statement.

Robert Speer, acting secretary of the Army, on Tuesday said a sufficient amount of available data supported granting the easement request. As a result, the Army would terminate its notice of intent to prepare an Environmental Impact Statement.

“This action will serve facilitate completion of the last mile and a half of the 1,172 mile pipeline, connecting the Bakken and Three Forks oil production areas in North Dakota to an existing crude oil terminal near Pakota, Illinois,” Speer said in a statement.