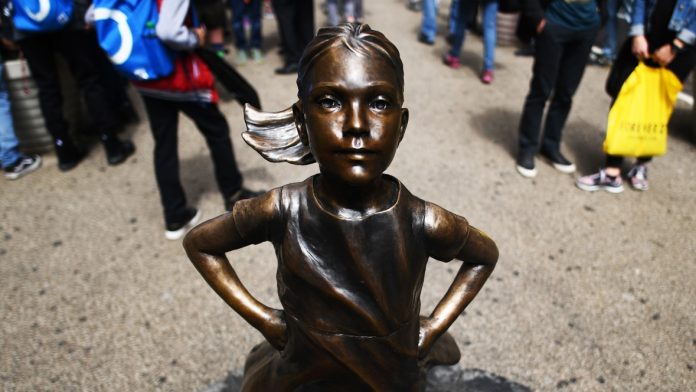 A New York City artist briefly placed a small statue of a urinating dog next to Wall Street’s Fearless Girl sculpture as a form of counter protest.

Fearless Girl was installed in March by a financial firm as a statement about the lack of women on the boards of big U.S. corporations. It faces the famous Charging Bull statue.

This is Alex Gardega, the man who added ‘pissing dog’ next to ‘Fearless Girl’

This is a misogynistic display regardless of what he says. pic.twitter.com/kr7IgSbmpX

The dog’s sculptor, Alex Gardega, told the New York Post that he thinks Fearless Girl is a disrespectful publicity stunt.

“It has nothing to do with feminism, and it is disrespect to the artist that made the bull…That bull had integrity.”

However, Gardega’s temporary installment — he removed his Pissing Pug after a few hours — sparked a wave of criticism online.

@RedTRaccoon What a douche!!!!! I’m an artist and this was not an act of art at all, it’s so full of hate! Somebody should remove that dog in the night

@RedTRaccoon @macmommamary Let the dog stay. It will remind us why the girls needs to stay strong, what she’s up against. And what a d-bag the artist is.

@womensmarch “Fearless Girl” so much outrage over a little dog. Femininity so fragile.

Fearless Girl creator Kristen Visbal and a representative for bull creator Arturo Di Modica did not immediately respond to comment requests on Tuesday.

Di Modica has previously complained that Fearless Girl turns his bull’s message of freedom, peace, strength, power and love into something negative.

Alex Gardena is every white guy who can’t stand that he has to compete with women and PoC in America. What a loser! https://t.co/fwzAimevO4