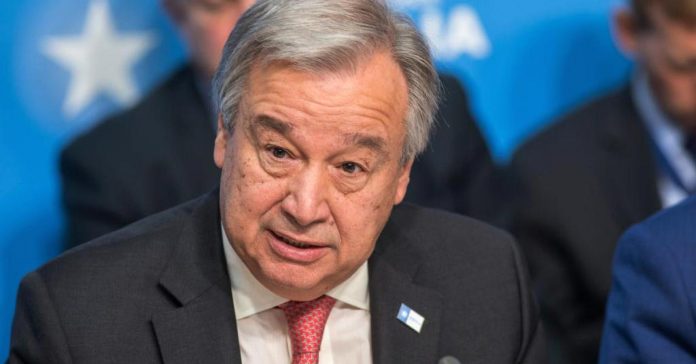 The “world is in a mess” and the effects of climate change are dangerous and accelerating, according to the UN secretary general.

In a speech on Tuesday at the New York University Stern School of Business, António Guterres said that it was “absolutely essential” that the world implemented the Paris Agreement.

Under the agreement, reached at the end of 2015, world leaders have committed to making sure global warming stays “well below” 2 degrees Celsius and to “pursue efforts” to limit the temperature rise to 1.5 degrees Celsius.

There are fears that President Donald Trump is set to pull the U.S. out of the deal – a decision is expected imminently – although Guterres remained forthright in his support for it and called for a united front.

“Yes, not everyone will move at the same pace or with equal vigour,” he said. “But if any government doubts the global will and need for this accord, that is reason for all others to unite even stronger and stay the course.”

In a question and answer session after his speech, Guterres said that a vacuum could not exist in geostrategic dimensions.

“If one country decides to leave a void, I can guarantee someone else will occupy it,” he noted, going on to add that, “if you leave a void to others to occupy you might be creating a problem to your own internal security.”

During his speech, Guterres said that the “sustainability train” had “left the station.”

“Those who fail to bet on the green economy will be living in a grey future,” he went on to state.

“On the other hand, those who embrace green technologies will set the gold standard for economic leadership in the 21st century.”

Back in the question and answer session, Guterres said, “We believe that it will be important for the U.S. not to leave the Paris Agreement.”

“But even if (the) U.S. government decides to leave the Paris Agreement, it’s very important for the U.S. societies as a whole – for the cities, the states, the companies, the businesses – to remain engaged with the Paris Agreement.”