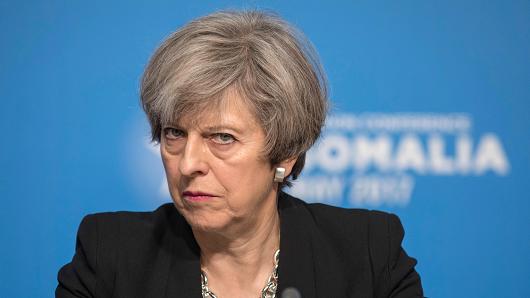 Prime Minister Theresa May attends the London Conference on Somalia at Lancaster House on May 11, 2017 in London, England.

Prime Minister Theresa May could lose control of parliament in Britain’s June 8 election, according to a projection by polling company YouGov, raising the prospect of political turmoil just as formal Brexit talks begin.

The YouGov model suggested May would lose 20 seats and her 17-seat working majority in the 650-seat British parliament, though other models show May winning a big majority of as much as 142 seats and a Kantar poll showed her lead widening.

If the YouGov model turns out to be accurate, May would be well short of the 326 seats needed to form a government tasked with the complicated talks, due to start shortly after the election, on Britain’s divorce from the European Union.

A later poll, a separate regular survey carried out by YouGov for Thursday’s Times newspaper, showed May’s Conservative Party just three percentage points ahead of the Labour opposition, which has been eating into her lead since the start of the campaign.

The Conservatives were on 42 percent, down a point from last week, with Labour up three points, the YouGov survey said.

The findings again weakened sterling which had earlier fallen almost a cent against the U.S. dollar on the YouGov model before rising on a Kantar poll which showed May’s lead had increased to 10 percentage points.

But if she does not handsomely beat the 12-seat majority Cameron won in 2015, her electoral gamble will have failed and her authority could be undermined just as she tries to deliver what she has told voters will be a successful Brexit.

If May fails to win an overall majority, she would be forced to strike a deal with another party to continue governing either as a coalition or a minority government.

That would raise questions about the future of Brexit, Britain’s $2.5 trillion economy and British policy on a range of issues including corporate taxation and government spending and borrowing.