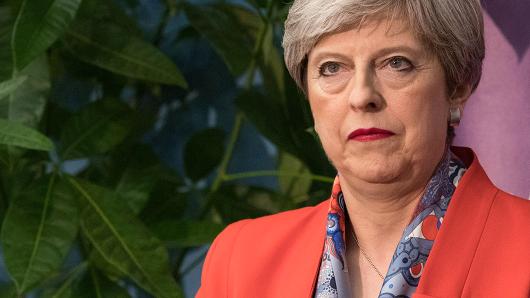 British Prime Minister and Conservative Party leader Theresa May speaks at the declaration at the election count at the Magnet Leisure Centre on June 9, 2017 in Maidenhead, England.

Chris Patten, former governor of Hong Kong and member of the U.K. House of Lords for the Conservative Party, criticised the deal with the DUP, calling it “very mistaken”.

“You give people a bung, which is what it is, in order to support you and sooner or later they come back for more bungs,” he told CNBC’s Street Signs.

“The idea that this is the last time the DUP will ask for loot is crazy. Of course Northern Ireland wants more spending, and so does Scotland, Wales and large parts of England.”

He added that the deal would harm the Conservative’s public image, and could endanger future cross-party talks. He also went on to discuss the future prospects for Theresa May.

“I think she’ll last as long as her colleagues think that it would be dangerous for her not to last. I think she’s on borrowed time, but nobody knows how much has been borrowed.”