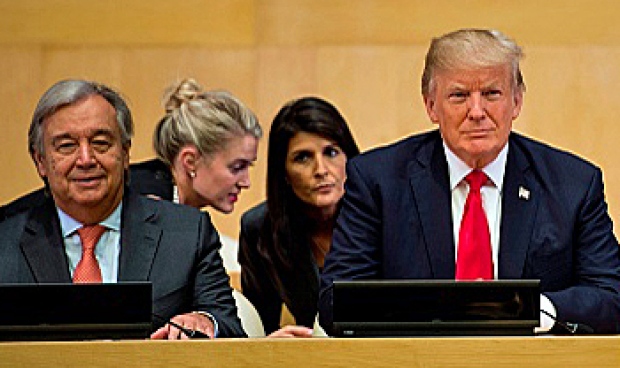 A reduction in the two-year budget of the United Nations — approved three days after the General Assembly voted 128 to 9 on Dec. 21 to reject President Donald Trump’s move to recognize Jerusalem as the capital of Israel — has been hailed as “historic” by the U.S.

But linking the budget cut — $285 million US off a budget of more than $5 billion — to the Jerusalem rebuke is more theatre than reality. Even the U.S. confirms they are unrelated.

Trump and UN Ambassador Nikki Haley did issue several warnings linking funding to last week’s vote. Haley went so far as to send a letter to more than 180 missions saying that her country and her president were taking the vote “personally” and that she was to report back on states that “voted against us.”

And then Trump doubled-down, threatening to cut funding to those countries. “Let them vote against us,” he said. “We will save a lot.”

‘They were never threatening to break consensus. They were very collaborative. It was no different from other years.’
– A UN diplomat

The negotiations on UN budget figures, however, predate the Jerusalem vote.

“To be clear, these significant reductions to the overall UN budget are a result of months-long negotiations in an effort to increase the UN’s efficiency and make the organization more effective, transparent, and accountable,” said a spokesperson for the U.S. mission.

Another diplomat familiar with the budget talks who spoke to CBC on condition of anonymity confirmed that the U.S. had essentially kept its position on the budget since early December — before any talk of moving the embassy had begun.

“We started negotiating this in October,” the diplomat said.

“The U.S. didn’t make an explicit link between the Jerusalem vote and the budget negotiations. They were never threatening to break consensus. They were very collaborative. It was no different from other years.”

That didn’t prevent the U.S. from pressing its advantage on the timing, however.

“Among a host of other successes, the United States negotiated a reduction of over $285 million off the 2016-2017 final budget,” said a statement from Ambassador Haley on Dec. 24.

“We will no longer let the generosity of the American people be taken advantage of or remain unchecked.”

While the U.S. may have led negotiations on driving costs down, the final budget is negotiated by all member states and adopted by consensus. No one country has the final say.

The UN spokesperson’s office reinforced that in a note to media a few days later, using a rounded-up number:

The key words there are “final” and “add-ons.” The final budget is consistently higher than the original program budget because of these so-called add-ons: unforeseen expenses that arise after the budget is approved.

The General Assembly has approved a budget of $5.396 billion for 2018-2019. The last program budget approved was $5.4 billion, meaning they’re virtually the same. 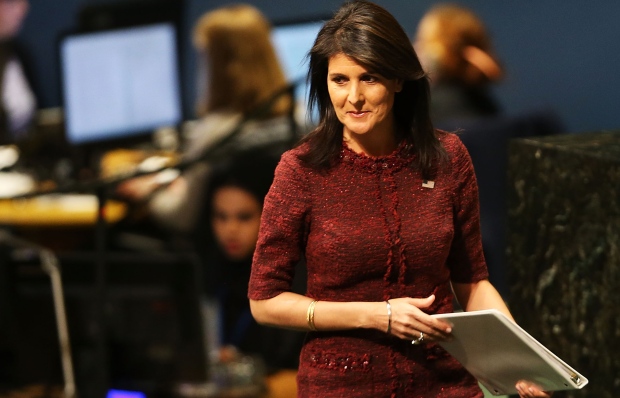 Haley sent a letter to more than 180 missions saying her country and her president were taking the vote ‘personally’ and that she was to report back on states that ‘voted against us.’ (Spencer Platt/Getty Images)

What the U.S. and the UN are using to calculate the savings is the difference between the final total spent in 2016-2017 including all add-ons ($5.682 billion) and the budget starting point for the 2018-2019 biennium.

“You’re not comparing apples to apples,” said a diplomat familiar with the negotiations.

“They want a bigger headline. They’re comparing [the current budget] to the highest number that they have available, which technically is not sound, but is not incorrect.”

The kicker is that the $285 million in apparent cost savings will diminish and may even disappear over the next two years, because there will invariably be more budget “add-ons.”

“We have secured a lower starting point,” explains a diplomat with knowledge of the talks. “The final number for the biennium will be higher.”

Still, the official insists the decrease should not be minimized, describing it as the result of a “Herculean effort” to go through the budget line by line finding cost reductions that allow the UN to do more with the same amount.

“It’s very easy to create new mandates. It’s much harder to shut them down.”

And it’s easy to find cases of spending increases during the two-year budget period.

“For example, the Human Rights Council passed a number of resolutions like extending the fact-finding commission on Myanmar,” said UN spokesperson Stéphane Dujarric. That costs money.

The UN also carried out renovations to its regional headquarters in Nairobi and Santiago, he said.

Then there is the perennial “recosting” of the budget caused by fluctuations in currency exchange rates, salary increases and inflation.

“Those are added costs.”

Secretary-General Antonio Guterres has made UN reform a priority since his appointment and proposed cuts of his own totalling $196 million, according to Dujarric. Some were accepted by member states, while others were not.

The final budget cuts are primarily administrative “targeted toward travel, the use of consultants, general operating expenses, furniture and equipment,” according to an internal memo obtained by CBC.

“If, however, this budget follows the same historical patterns as previous budgets, it will increase at least five per cent throughout the biennium,” it says.

The General Assembly has endorsed a proposal put forward by the secretary general to move from a biennial to an annual budget, on a trial basis.

Dujarric calls it one of the “most significant shifts” in UN budget planning since the 1970s.

“It’s much easier to plan over one year than over two years,” he said, “especially given the kind of world the United Nations operates in.”