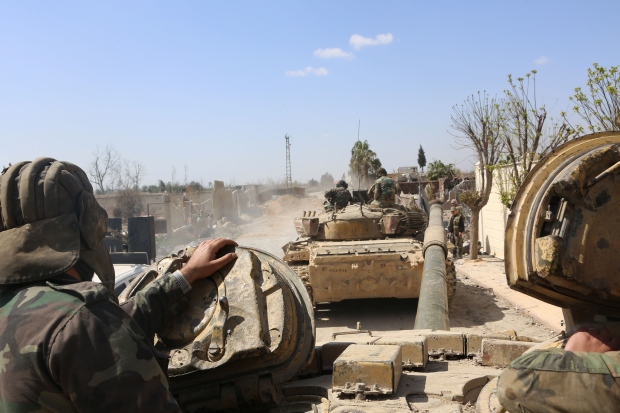 The United States pushed the United Nations Security Council on Monday to demand a ceasefire in Damascus and rebel-held eastern Ghouta, where Syrian President Bashar al-Assad’s forces say they are targeting “terrorist” groups that are shelling the capital.

The United Nations has described eastern Ghouta as “hell on Earth.” The United States circulated a draft resolution to the 15-member council that demands an immediate 30-day cessation of hostilities and asks UN Secretary General Antonio Guterres to “urgently develop proposals for monitoring of implementation of the cessation of hostilities and any movement of civilians.”

It was not immediately clear when the draft text, seen by Reuters, could be put to a vote.

A picture taken on Sunday shows Syrian government forces outside of the town of Jisreen in the southern tip of the rebel-held eastern Ghouta enclave as they advance in the area. (Stringer/AFP/Getty Images)

More than 1,000 people were killed and 4,800 wounded in the first two weeks of the Syrian military’s offensive on rebel-held eastern Ghouta, the organization Doctors Without Borders said last week. The region near Damascus has been under heavy bombardment since Feb. 18.

Nikki Haley, the U.S. ambassador to the UN, warned on Monday that if the Security Council fails to act on Syria, Washington “remains prepared to act if we must,” just as it did last year when it fired missiles at a Syrian government air base over a deadly chemical weapons attack.

“It is not the path we prefer, but it is a path we have demonstrated we will take, and we are prepared to take again,” Haley told the council.

Syrian TV on Monday said another group of civilians has left the rebel-held enclave through a corridor established by the Syrian army.

The state-run TV broadcast footage shows a small group of men, women and children it says left the town of Madyara on Monday. The town was captured by Syrian troops on Sunday.

Syrian government forces split eastern Ghouta in two amid rapid weekend advances, dealing a major setback to the rebels and threatening to exacerbate an already dire humanitarian situation at the doorstep of the country’s capital.

The advances also cut off key towns of Douma and Harasta from the rest of the enclave, further squeezing the residents inside them.

The UN estimates nearly 400,000 civilians are living under a crippling siege in eastern Ghouta.