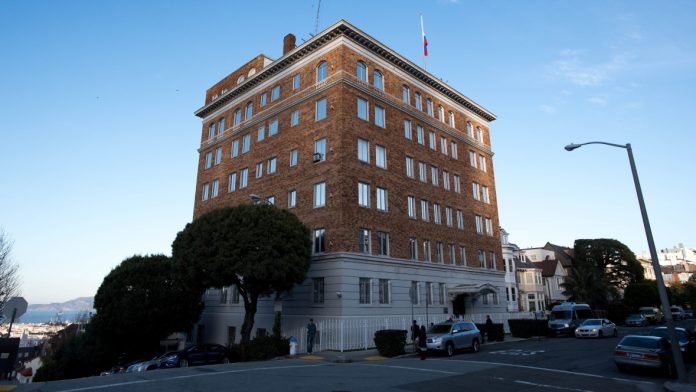 The United States is retaliating against Russia by forcing closure of its consulate in San Francisco and scaling back its diplomatic presence in Washington and New York.

The State Department said the move is in response to the Kremlin forcing a cut in U.S. diplomatic staff in Moscow. Spokesman Heather Nauert said the move brings the U.S. and Russia into “parity,” with each having three consulates in the other country.

“We believe this action was unwarranted and detrimental to the overall relationship between our countries,” Nauert said in a State Department statement on Thursday.

Moscow forced the cut in U.S. diplomatic staff earlier this year in retaliation for U.S. sanctions. The sanctions were imposed in response to Russian meddling in the 2016 presidential election and to punish Russia further for its 2014 annexation of Crimea from Ukraine.

Moscow followed that move by ordering the U.S. to cut its diplomatic and technical staff in Russia by more than half, to 455 people,

To cope with the reduction in staff in Russia, the United States said last week it would have to sharply scale back visa services, a move that will hit Russian business travellers, tourists and students.

Secretary of State Rex Tillerson had said the U.S. would respond by September.

The Russian offices must close by Saturday. The order affects Russia’s “chancery annex” in Washington and a “consular annex” in New York.

“Moscow will closely study the new measures announced by the Americans, after which our reaction will be conveyed,” the Russian foreign ministry said in a statement.