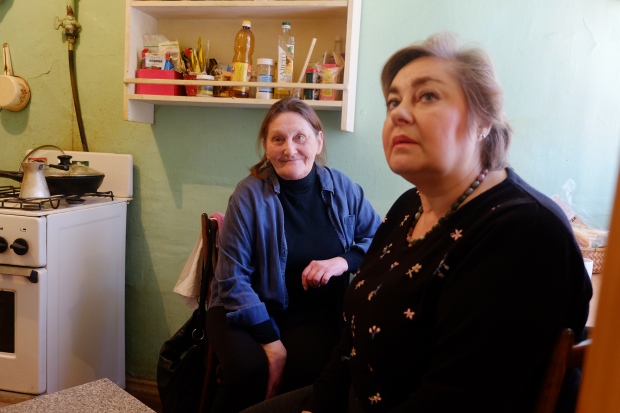 In 64 years, Natalia Isokevich had never before wiggled her bum or thrust her pelvis in front of camera. That has since changed.

In fact, twerking is how hundreds of thousands of Russians will remember her from now on.

Along with her good friend, 60-year-old Ksenia Negretova, Isokevich shot to YouTube fame recently after the pair lip-synched a music video that manages to spoof both Russia’s social conservative values and its upcoming presidential election all at the same time.

“I’m a doer,” Negretova told CBC News in her tiny, Soviet-era apartment in St. Petersburg. “So if I want something, I do it.”

In this case, what the pair did was shake their booties and dance through Isokevich’s rundown communal flat to an old Euro-pop tune called Satisfaction.

Pausing in the kitchen to stare into the camera, they licked cooking utensils provocatively and rubbed up against each other in feigned eroticism.

Their now-notorious performance was dreamed up as a show of political solidarity with some student airline pilots whose dormitory antics dancing to the same song nearly got them expelled from one of Russia’s top flying programs.

Shot in October, but posted to the internet in mid-January, the video shows the cadets stripped down to their underwear and twerking through their dorm rooms, ironing, cleaning and putting a sexy spin on otherwise mundane tasks.

One cadet is seen repeatedly licking a banana seductively.

Outraged by the homoerotic undertones, embarrassed school officials — and many in Russia’s government — called for them all to be expelled.

And they might have been, if people such as Isokevich and Negretova, along with scores of other Russians, hadn’t taken a stand.

Parody videos of other Russians in their underwear began popping up all over social media along with thousands of posts on Facebook and other platforms calling on authorities to cut the young men some slack.

Stung by the unexpected show of support, school officials backed off.

“I was extremely outraged by the scandal that was whipped up over these boys,” said Negretova.

If Russia’s president can take his shirt off all the time in public, she says, what’s wrong with seeing buff young bodies having some fun?

People over 55 in Russia are entitled to a pension of about $300 Cdn a month. The money has to cover their apartment and all of their living expenses. (Corinne Seminoff/CBC)

“I have to say their taste in underwear was extremely impressive,” she said, laughing. “Honestly, it [the underwear] really gave me joy!”

Isokevich shared the sentiment: “I believe as long as they weren’t hurting anyone, let them do it. We really wanted to express our protest against this idiocy about what happened to these boys.”

Coming in the midst of Russia’s presidential election campaign, the women say they also saw an opportunity for their video do something else — to give a close-up look at the poverty that many Russian pensioners experience.

“You know what they call them [the pension years] here?” Isokevich asked. “The age of survival.”

“We have to be ready to die if we are retired,” says Negretova.

Most Russians over the age of 55 qualify for a government pension.

Isokevich receives the equivalent of just $300 Cdn a month, of which $70 goes toward her tiny, shared apartment.

The living space amounts to about 160 square feet — enough for a bed, a tight kitchen and little else. 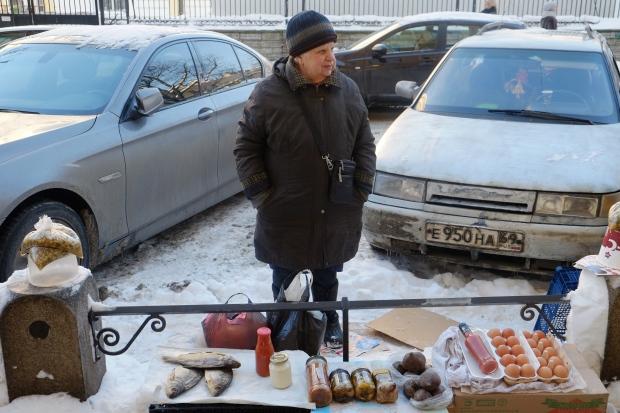 Outside a St. Petersburg church, Russian seniors try to sell whatever they can to boost their meagre monthly pensions. (Corinne Seminoff/CBC)

She shares a toilet with other apartments, but says her son managed to construct a shower stall next to her refrigerator so she has at least some privacy.

“We can’t even try to live on pension money,” she says. “It’s impossible.”

The official state agency that administers seniors’ pensions actually insists no one lives below the poverty line. It defines a poverty level wage as a paltry 9000 rubles, or about $190 Cdn a month.

Using a higher threshold, Statistics Russia puts the number of “poor” Russians at around 20 million, with about 30 per cent of those being children.

But independent public opinion surveys indicate most Russians consider 15,500 rubles a month ($340 Cdn) to be a better indication of poverty level.

Using that figure, close to 40 million Russians would be considered poor, a number that has been growing steadily by two to three million people a year over the past several years.

In his recent state of the nation speech, Putin vowed to cut the poverty rate within six years, although he offered few specifics about how that might happen.

Both women work — Isokevich in sewing factory and Negretova as a psychiatrist — to supplement their pensions.

They say they have no choice but to continue to work until they are too old or ill to keep going.

And Isokevich says the government has options to improve living conditions if it wanted to — instead, she says, the money is going to Russia’s military.

“We shouldn’t be focused on military victories all the time,” says Negretova.

Russians go to the polls next Sunday, March 18, to vote in the presidential election but both women say they will not be casting ballots — especially for President Vladimir Putin, who has a lock on extending his 18-year rule for another six-year term.

“We are poor people who don’t have money at all.

Negretova and Isokevich are funny, bold and brash — and willing to say and do things in defiance of the official Kremlin line that many Russians wouldn’t dare.

And they say they’re heartened by the response their video and political statements have been getting.

“I was afraid to go to work,” says Negretova, fearing how her co-workers would react.

“But they applauded me.”