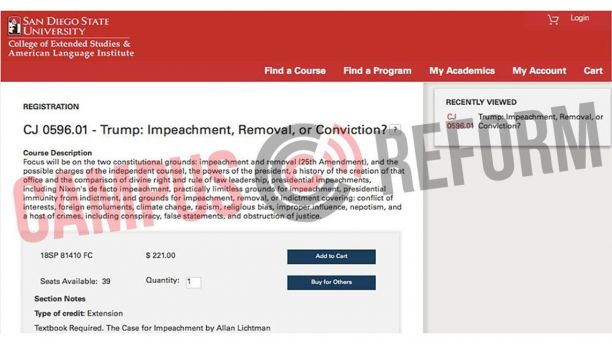 A California university is offering a class focused solely on the topic of removing President Trump from office.

“Focus will be on the two constitutional grounds: impeachment and removal (25th Amendment), and the possible charges of the independent counsel,” the course description reads in part, as first reported by university watchdog group, Campus Reform.

The class will cover “grounds for impeachment, removal, or indictment” such as “conflict of interests, foreign emoluments, climate change, racism, religious bias, improper influence, nepotism, and a host of crimes, including conspiracy, false statements, and obstruction of justice.”

The only required reading is Allan Lichtman’s “The Case for Impeachment” in which the American University professor “makes the case for impeaching the 45th president of the United States, Donald J. Trump.”

The university and Cleary did not immediately respond to Fox News’ request for comment on Tuesday.

While the book looks at impeached presidents Andrew Johnson and Bill Clinton’s “hearings,” it focuses on Richard Nixon’s resignation and “shows how Trump exhibits many of the flaws (and more) that have doomed past presidents.”

Lichtman boasts 30 years of predicting presidential races correctly, including Trump’s victory over failed Democratic presidential candidate Hillary Clinton, touting his “next big prediction” was that Trump would be impeached.

The book serves as a “warning about the dangers of Trump’s rogue presidency” and a “guide to the myriad transgressions” he predicts will lead to impeachment.

“Trump’s penchant for lying, disregard for the law, and conflicts of interests are lifelong habits that will permeate his entire presidency,” Lichtman wrote. “He has a history of mistreating women and covering up his misdeeds. He could commit his crime against humanity, not directly through war, but indirectly by reversing the battle against catastrophic climate change, upon which humanity’s well-being will likely depend. His dubious connections to Russia could open him to a charge of treason. His disdain for constitutional restraints could lead to abuses of power that forfeit the trust of even a Republican Congress.”

Trump wrote on Tuesday morning a series of tweets related to this topic.

The president then also quoted law professor Jonathan Turley, who said on Fox News: “I just don’t see the evidence…in terms of the collusion, it’s all a bit implausible based on the evidence we have.”

But Lichtman writes that he’s not calling for a “witch hunt,” but rather “to assess at what point impeachment becomes necessary to protect America’s constitutional liberties and the vital interests of the nation.”

Lichtman notes that while former lawyers in the Obama administration formed a group to monitor Trump’s alleged violations of law and the Constitution, it’s ultimately up to the democratic activism of the American people.

Rep. Maxine Waters, D-Calif., told her fellow Democrats to “get ready for impeachment” at a speech in San Diego Saturday. She has chanted many times: “Impeach 45!”

The course is being offered for $221 through SDSU’s Criminal Justice program, which is a part of the school’s College of Professional Studies and Fine Arts.