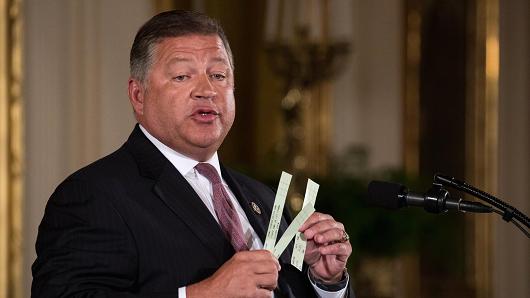 But Shuster vowed to work with the Senate to move forward with legislation to reauthorize the Federal Aviation Administration, which expires at the end of March. Without authorization the FAA would not be able to collect aviation taxes and many of its employees would have to be laid off.

In June, Trump unveiled a plan to privatize air traffic control in what he said would modernize the system and lower flying costs.

Democrats contended it would hand control of a key asset to special interests and big airlines, and some Republicans opposed it.

On Tuesday, the Aircraft Owners and Pilots Association, along with nearly 250 general aviation organizations, state and local aviation officials, labor unions, consumer groups and airports said they had sent a letter to congressional leaders vowing to oppose any effort to privatize air traffic control.

Under the proposal, air traffic control would be spun off from the FAA and put under the oversight of a nonprofit corporation.

Trump has said current air traffic reform efforts have failed and were a total waste of money.

Opponents said the U.S. system is so large that privatization would not save money, and would drive up ticket costs and could create a national security risk. Opponents also say technology upgrades would be sidetracked while the private entity was set up, potentially adding years to awarding contracts.