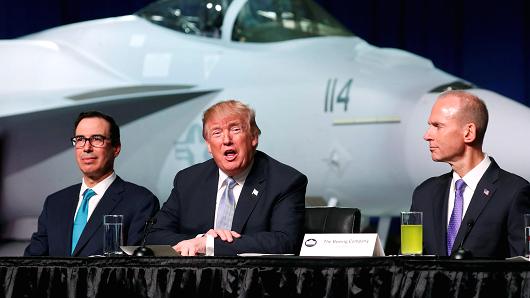 It would appear as though Boeing’s F-18 Super Hornet fighter jet has entered back into President Donald Trump’s good graces.

Trump said the jet is not only “his favorite plane” but also described it as “a work of art” during a roundtable discussion at Boeing’s testing and finishing facility in St. Louis, Missouri.

“You look at the workers and the talent that went into it and we just looked at different versions of it and its a spectacular and a beautiful thing to watch,” Trump said.

“If we didn’t make the best products I wouldn’t ask them to do it but we make by far the best fighter jets, we make the best there is in the military world,” Trump added.

Trump also noted that the U.S. plans to buy 24 more F-18 jets saying the planes would be the “latest and the greatest stealth and a lot of things on that plane that people don’t even know about.”

And while the Navy and Boeing are currently negotiating a service life modification contract that could add some components native to a stealth aircraft, as it stands now, Boeing does not field stealthy F-18s capable of evading radar.

Trump continued by saying the government and Boeing were working on a price and that “maybe we can work out a good price.”

“Otherwise, we are going to buy them from somebody else but it will all be in the United States, right?”

“I don’t know, I have a feeling that, what do you think Dennis, we’re gonna make a deal?” Trump asked turning to Muilenburg. “We’ll find a way,” Muilenburg responded.