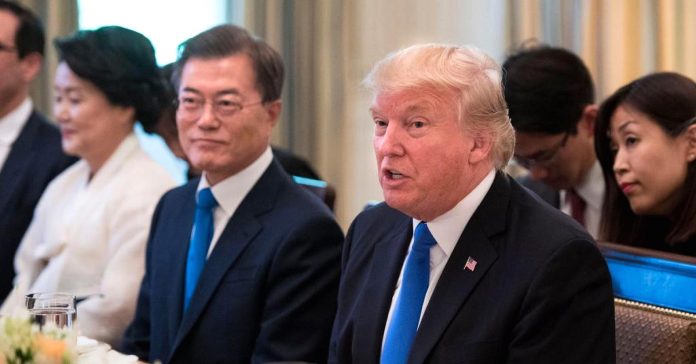 Concerns about the U.S. military’s THAAD missile defense system and China’s role in the region also are likely to come up in talks between Trump and Moon at the White House.

Moon, making his first trip to the United States since becoming his country’s president in May, joined Trump and his wife, Melania, for dinner in the White House State Dining Room on Thursday evening ahead of further talks on Friday.

“I know you’ve been discussing with our people some of the complexities of North Korea and trade and other things, and we’ll be discussing them all as we progress, and it could be very well late into the evening,” Trump told Moon.

“I’d like to also congratulate you upon your election victory. It was a great victory, and you did a fantastic job. A lot of people didn’t expect that, and I did expect it. I thought that was going to happen.”

Both men have an interest in building a strong relationship but tensions could puncture that effort.

Trump has spoken harshly about U.S. trade imbalances with South Korea and threatened to tear up a trade agreement with the country. Moon has taken a wary stance on the Terminal High Altitude Area Defense (THAAD) system that the United States deployed in South Korea in March.

“I think they’ll have a friendly and frank discussion about the trade relationship,” a White House official told reporters on Wednesday, noting concerns about barriers to U.S. auto sales and surplus Chinese steel that arrives in the United States via South Korea.

After the dinner, Trump tweeted that he had a “very good meeting” with Moon and that “many subjects (were) discussed including North Korea and new trade deal!”

In an interview with Reuters in April, Trump called the 5-year-old trade deal “horrible” and said he would either renegotiate or terminate it.

During remarks at the U.S. Chamber of Commerce on Wednesday, Moon said unfair trade practices would be eradicated and factors that limited competition, such as market entry barriers and price regulations, would be re-evaluated under his administration.

Trump has made challenging trade agreements a hallmark of his administration since taking office in January.