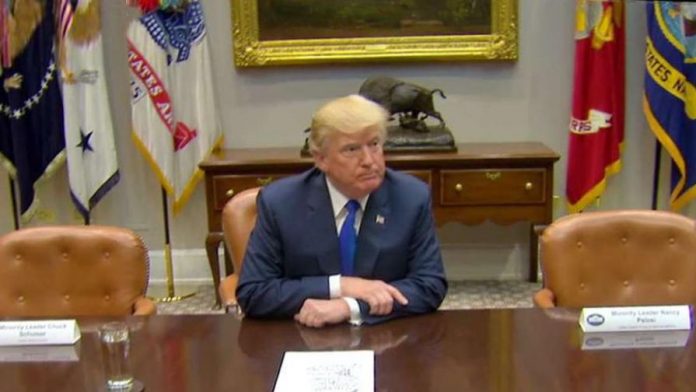 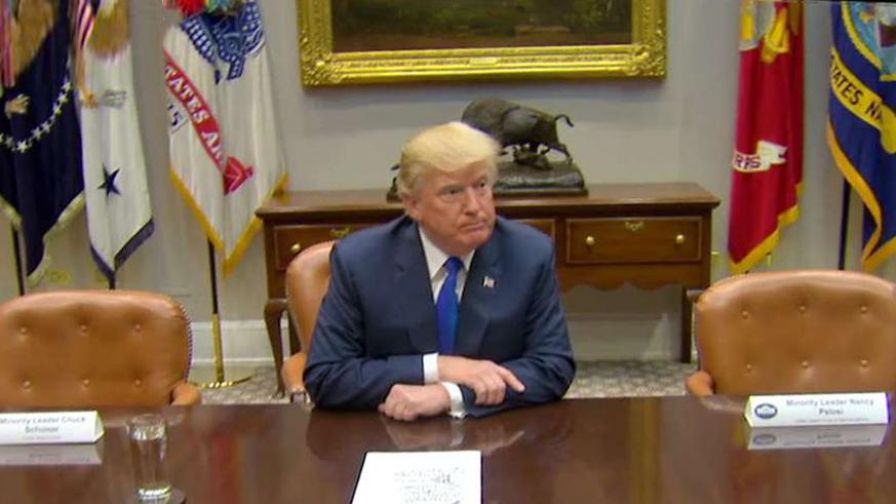 President Trump called out Nancy Pelosi and Chuck Schumer for boycotting a White House meeting Tuesday afternoon, by leaving two seats conspicuously empty — and accusing the no-show Democratic leaders of being “all talk” and “no action.”

“And now, it’s even worse. Now it’s not even talk. So they’re not showing up for the meeting,” Trump told reporters.

But the president was sure to keep two seats empty on either side of him, along with nametags for Pelosi and Schumer. 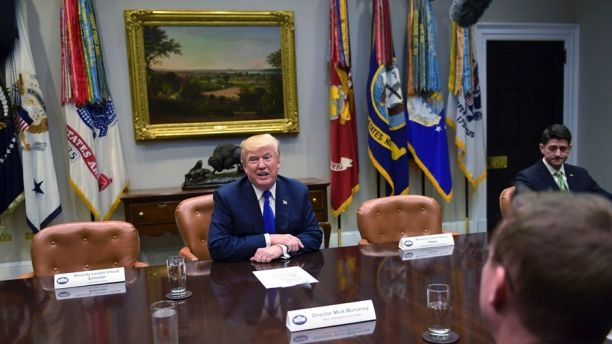 Nov. 28, 2017: President Trump sits next to empty seats where Democratic leaders would have been if they hadn’t skipped a White House meeting.

Trump originally had scheduled a meeting at the White House Tuesday with top congressional leaders of both parties. But on Tuesday morning, Pelosi and Schumer pulled out, in retaliation for a Trump tweet suggesting they couldn’t reach a bipartisan budget deal.

“.@realDonaldTrump now knows that his verbal abuse will no longer be tolerated. His empty chair photo opp showed he’s more interested in stunts than in addressing the needs of the American people. Poor Ryan and McConnell relegated to props. Sad!” she tweeted.

During the session with reporters, Trump said he was “not that surprised” the two top congressional Democrats did not show up for discussions on tax reform and efforts to avert a government shutdown.

“Nothing to them is important other than raising taxes,” Trump said.

The back-and-forth points to a quickly souring relationship between Trump and the top Hill Democrats, who had been working cautiously together in recent months.

Schumer, D-N.Y., and Pelosi, D-Calif., had pulled out of their meeting after the president hinted any bipartisan deal would be thwarted by Democrats’ desire to include immigration reform and tax increases.

“Meeting with ‘Chuck and Nancy’ today about keeping government open and working. Problem is they want illegal immigrants flooding into our Country unchecked, are weak on Crime and want to substantially RAISE Taxes. I don’t see a deal!” Trump tweeted.

Schumer and Pelosi said in a joint statement: “Given that the president doesn’t see a deal between Democrats the White House, we believe the best path forward is to continue negotiating with our Republican counterparts in Congress instead.”

Schumer also said on the Senate floor that Trump was not interested in a bipartisan deal.

“If the president, who already earlier this year said ‘Our country needs a good shutdown’ … isn’t interested in addressing the end-of-the-year agenda, we’ll work with those who are interested in funding the government,” Schumer said.

White House Press Secretary Sarah Sanders encouraged Pelosi and Schumer before the meeting to “put aside their pettiness, stop the political grandstanding, show up and get to work.”

McConnell and Ryan, who both attended the meeting, slammed the Democratic leaders for their pullout.

“We have important work to do, and Democratic leaders have continually found new excuses not to meet with the administration to discuss these issues,” McConnell and Ryan said in a joint statement before the meeting, noting that “if Democrats want to reach an agreement, they will be there.”

Congress has until Dec. 8 to pass stopgap legislation to keep the government open, and Tuesday’s protest from Pelosi and Schumer points to a difficult negotiation ahead.

“We look forward to continuing to work in good faith, as we have been for the last month, with our Republican colleagues in Congress to do just that,” Schumer and Pelosi said.