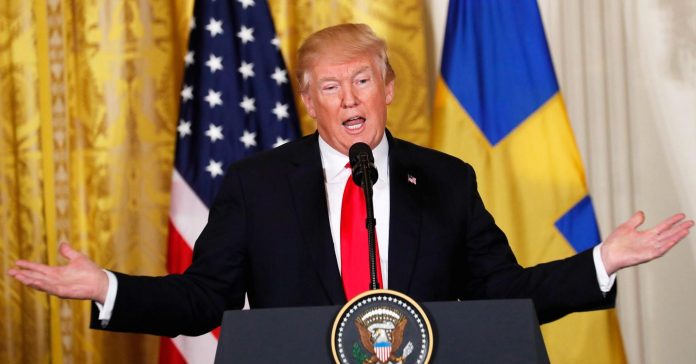 President Donald Trump has beeninjecting uncertainty into the stock market lately, and the jolts and volatility could continue as long as investors worry about trade wars.

But analysts see market turbulence, for now, not necessarily a deeper sell-off.

“I think the same applies to trade concerns,” he said. “If we end up in a full-blown trade war, that would be bad. But at this point in time, we’re far away from that.”

Stocks were rocky Tuesday morning after Secretary of State Rex Tillerson was let go by the White House, just days after the administration agreed to talks with North Korea. The market brushed that off.

But stocks really tumbled when reports started to circulate Tuesday afternoon that the Trump administration could slap tariffs on China on technology, apparel and other imports. Under consideration were also investment and visa restrictions.

Dan Clifton, head of policy research at Strategas, said the Tillerson move will no doubt be followed by other shake-ups but that should not send longer-term shock waves through the market.

“It’s possible that H.R. McMaster goes,” Clifton said. “I think John Bolton might replace him as national security advisor.” Bolton is a former U.N. ambassador who is viewed as hawkish.

“It seems Trump is putting in his next wave of personnel here,” said Clifton. Those types of moves shouldn’t impact the market “as long as that’s contained and the results of this is just palace intrigue.”

“If you start having a Chinese trade war or greater geopolitical risk, then it starts to become a greater worry for the market overall,” Clifton said. He said the size of the tariffs on Chinese goods was greater than expected and could be a negative for the market.

Trade has been the one big worry hanging over markets since Trump’s election. His other policies have been market positives, particularly tax cuts. But the level of anxiety has risen since Trump imposed tariffs on imported steel and aluminum, and unease remains about the NAFTA negotiations with Canada and Mexico.

“We already have tax cuts and deregulation,” said Edward Keon, portfolio manager at QMA. “That’s on the books. But on trade, the market rightly fears that could easily spin out of control.”

Keon said the trade story depends on how trade partners respond. “It’s complicated from a game-theory point of view of who is going to do what. The market then worries that this is going to be not just one action but a series of actions.”

Keon said he also viewed the administration’s blocking of Broadcom‘s proposed purchase of Qualcomm as a negative undercurrent for the market. Although Broadcom is based in Singapore, a U.S. panel found that it was a competitive concern with China.

“Concerns about the possibility of a trade war and concerns about the shutting down of one tech deal may be a precursor for others and that may imply lower valuations for technology companies,” said Keon.

Keon said the markets weren’t that concerned about the musical chairs in the Trump administration, but the fact that Kudlow was in the running for a White House post was a positive.

“The market is clearly concerned about trade. Having a free trader in the top economic spot is probably good news. If you balance that out over the course of the day, having a globalist like Rex Tillerson out and this new report of tariffs maybe rekindled fears of possible trade wars,” Keon said.