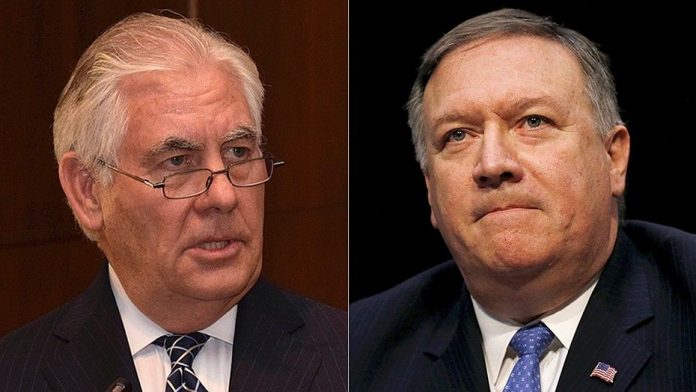 President Trump on Tuesday ousted Rex Tillerson (left) as secretary of state and said he is replacing him with CIA Director Mike Pompeo (right).

President Trump on Tuesday ousted his embattled top deplomat Rex Tillerson as secretary of state and said he is replacing him with CIA Director Mike Pompeo.

“Mike Pompeo, Director of the CIA, will become our new Secretary of State,” the president tweeted. “He will do a fantastic job! Thank you to Rex Tillerson for his service!”

There had been longstanding rumors throughout most of Tillerson’s tenure of friction between Trump and him.  Tillerson had just returned from a shortened trip to Africa hours before Trump’s announcement. Trump offered no explanation for the change.

“The president wanted to make sure to have his new team in place in advance of the upcoming talks with North Korea and various ongoing trade negotiations,” the adviser said.

Tillerson, the former chief executive of ExxonMobil, was tapped as Trump’s first secretary of state. But the two clashed over foreign policy strategies over the last year.

“I want to thank Rex Tillerson for his service,” Trump said in a statement. “A great deal has been accomplished over the last fourteen months, and I wish him and his family well.”

In a statement released by the White House, Pompeo said: “I am deeply grateful to President Trump for permitting me to serve as director of the Central Intelligence Agency and for this opportunity to serve as secretary of state. His leadership has made America safer and I look forward to representing him and the American people to the rest of the world to further America’s prosperity.”

Trump said he is naming Gina Haspel the new director of the CIA. Haspel has served as Pompeo’s deputy and will become the first woman to serve as director.

“I am grateful to President Trump for the opportunity, and humbled by his confidence in me, to be nominated to be the next Director of the Central Intelligence Agency,” Haspel said in a statement.

Fox News’ Jennifer Bowman and Serafin Gomez and The Associated Press contributed to this report.