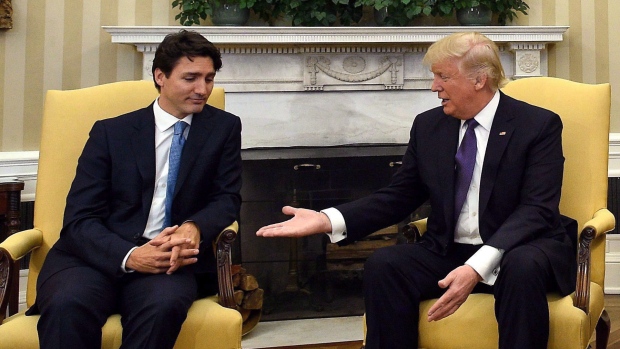 U.S. President Donald Trump boasted in a fundraising speech in Missouri on Wednesday that he made up facts about trade in a meeting with Prime Minister Justin Trudeau, according to a recording of the comments obtained by The Washington Post.

The newspaper said in a report posted on its website that Trump had insisted to Trudeau that the United States runs a trade deficit with its neighbour to the north without knowing whether or not that was the case.

Trump said on the recording that after Trudeau told him the U.S. does not have a trade deficit with Canada, he replied, “Wrong, Justin, you do,” then added, “I didn’t even know…. I had no idea.”

The president said he then “sent one of our guys out” to check the prime minister’s claim.

“Well, sir, you’re actually right,” Trump says in the recording. “We have no deficit but that doesn’t include energy and timber — and when you do, we lose $17 billion a year. It’s incredible.”

Trump regularly bemoans a trade deficit with Canada and complained about it in late February by saying: “We lose a lot with Canada. People don’t know it. Canada’s very smooth. They have you believe that it’s wonderful. And it is, for them. Not wonderful for us.”

But a different story is told in the recently released 2018 White House “Economic Report of the President” — an annual document prepared by Trump’s own team which bears his signature and contradicts a number of trade statements and policies already articulated by him.

One example involves the supposed trade deficit with Canada. Trump keeps insisting it exists, but the document he signed states Canada is among the few countries in the world with whom the U.S. runs a surplus.

The document states: “The United States ran a trade surplus of $2.6 billion with Canada on a balance-of-payments basis.”