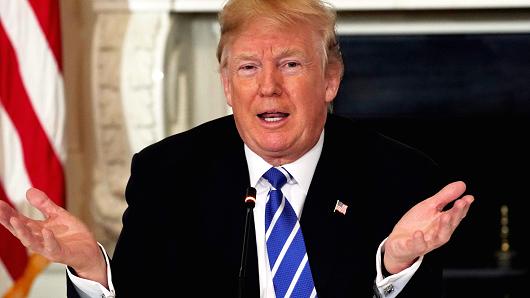 U.S. President Donald Trump holds a meeting on his infrastructure initiative at the White House in Washington, February 12, 2018.

President Donald Trump appears to have understated just how much the U.S. asked Beijing to cut the trade deficit between the two countries — by $99 billion.

The Trump administration has asked Beijing for a $100 billion reduction in the trade deficit, The Wall Street Journal reported Thursday, citing people familiar with the talks. U.S. officials reportedly made their request in a meeting with Chinese President Xi Jinping’s top economic deputy last week.

That is very different than a tweet posted by Trump on Wednesday, in which he claimed to have asked for a $1 billion reduction in the annual trade deficit.

“Our relationship with China has been a very good one,” Trump tweeted. “We look forward to seeing what ideas they come back with. We must act soon!”

The White House did not immediately respond to CNBC’s request for comment.

The monthly trade deficit with China surged 16.7 percent, to $36 billion, in January, its highest level since September 2015, suggesting that Trump’s “America First” policies have not yet had a material impact. Meanwhile, the United States’ total trade deficit increased to a more than nine-year high during the first month of 2018.

A $100 billion decrease in the U.S.-China trade deficit would represent a 26.7 percent reduction in the annual disparity, which totaled more than $375 billion in 2017. Trump’s $1 billion figure represents less than 0.3 percent of that year’s imbalance.