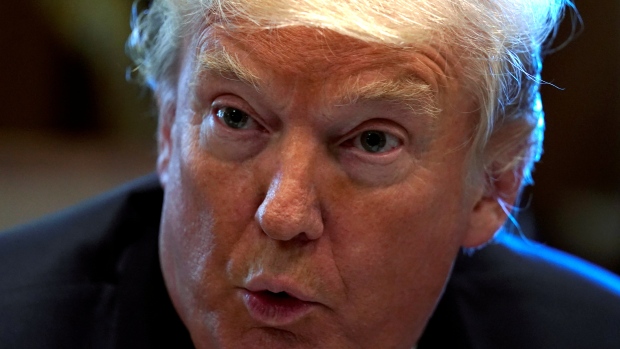 Trump retweeted them from Jayda Fransen, the deputy leader of the far-right group Britain First, a small fringe group whose profile was elevated by Trump’s attention.

The group’s tweets read: “VIDEO: Islamist mob pushes teenage boy off roof and beats him to death!” and “VIDEO: Muslim Destroys a Statue of Virgin Mary!” and “VIDEO: Muslim migrant beats up Dutch boy on crutches!” The origins of the videos could not immediately be determined.

Britain First is a far-right group that opposes multiculturalism and what it calls the “Islamization” of Britain. It has run candidates in local and national elections, with little success, and has campaigned against the construction and expansion of mosques.

Trump did not offer any explanation for why he retweeted the videos, and the White House did not immediately respond to request for comment. The retweets came amid a flurry of early morning Trump posts.

It’s not the first time Trump has retweeted inflammatory content or posts from controversial Twitter accounts. He has shared messages from accounts that appeared to have ties to white nationalist groups. He has retweeted a conservative Trump supporter who used social media to draw attention to “pizzagate,” an unfounded conspiracy theory that claims Democrats harbour child sex slaves at a pizza restaurant.

He has also retweeted doctored videos, including one that appeared to show him hitting Hillary Clinton with a golf ball.

Throughout his presidential campaign, Trump offered anti-Muslim commentary, saying he would “strongly consider” closing mosques and insisting that “Islam hates us.” As president he has sought to ban travel from majority-Muslim countries. He said earlier this year that “we have to stop radical Islamic terrorism.”

After Trump retweeted the videos, Fransen quickly responded on Twitter, saying in all-capital letters: “Donald Trump himself has retweeted these videos and has around 44 million followers! God bless you Trump! God bless America!”

Fransen has been charged with causing religiously aggravated harassment over leaflets and videos that were distributed during a criminal trial earlier this year. She has separately been charged with using “threatening, abusive or insulting words or behavior” over a speech she made in Northern Ireland in August. She is currently on bail.

She was convicted last year of religiously aggravated harassment and fined after hurling abuse at a Muslim woman wearing a hijab.

Trump’s retweets were condemned by Brendan Cox, whose lawmaker wife Jo Cox was murdered last year by an attacker with far-right views.

Brendan Cox tweeted: “Trump has legitimised the far right in his own country, now he’s trying to do it in ours. Spreading hatred has consequences & the President should be ashamed of himself.”

Trump’s tweets were also condemned by TV host Piers Morgan who tweeted: “Good morning, Mr President @realDonaldTrump — what the hell are you doing retweeting a bunch of unverified videos by Britain First, a bunch of disgustingly racist far-right extremists? Please STOP this madness & undo your retweets.”