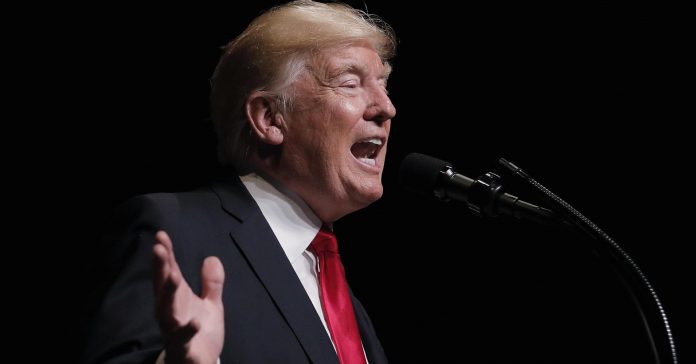 After reporters complained, Sanders announced that the president’s remarks would be opened to the press — only to reverse herself hours later.

Sanders said there was nothing unusual about raising political cash so early.

“He’s raising money for the party,” she said. “I don’t think that’s abnormal for any president.”

Sanders’ statement that Trump is raising cash for the GOP told only part of the story, though.

The first cut of the money raised goes to Trump’s 2020 re-election campaign. The rest gets spread among the RNC and other various Republican entities. Having multiple beneficiaries is what allowed Trump to ask for well above the usual $5,400 per-donor maximum for each election cycle.

Those contribution limits are likely to change because this fundraiser is so early that new donation limits for 2020 have not been set by the Federal Election Commission.

rump’s hotel has become a place to see and be seen by current and former Trump staffers, as well as lobbyists, journalist and tourists. Several Washington influencers popped into the hotel’s lobby even though they didn’t plan to attend the event.

Trump’s decision to hold a fundraiser at his own hotel again raised issues about his continued financial interest in the companies he owns. Unlike previous presidents who have entirely divested from their business holdings before taking office, Trump moved his global business empire assets into a trust that he can take control of at any time. That means that when his properties — including his Washington hotel — do well, he stands to make money.

Trump technically leases the hotel from the General Services Administration, and profits are supposed to go to an account of the corporate entity that holds the lease, Trump Old Post Office LLC. It remains unclear what might happen to any profits from the hotel after Trump leaves office, or whether they will be transferred to Trump at that time.

Under campaign finance rules, neither the hotel nor the Trump Organization that operates it can donate the space. It must be rented at fair-market value and paid for by either the Trump campaign, the RNC or both.

In the first three months of this year, the Trump campaign raised more than $7 million, through small donations and the sale of Trump-themed merchandise such as the ubiquitous, red “Make America Great Again” ball caps.

The RNC also is benefiting from the new president’s active campaigning, having raised about $62 million through the end of last month. The party has raised more online this year than it did in all of 2016 — a testament to Trump’s success in reaching small donors.

Trump’s re-election money helps pay for his political rallies. He’s held five so far, and campaign director Michael Glassner says those events help keep him connected to his base of voters.

Walters also says the White House takes care to make sure that Trump’s political events and travel — including the Wednesday fundraiser — are paid for by the campaign and other political entities.