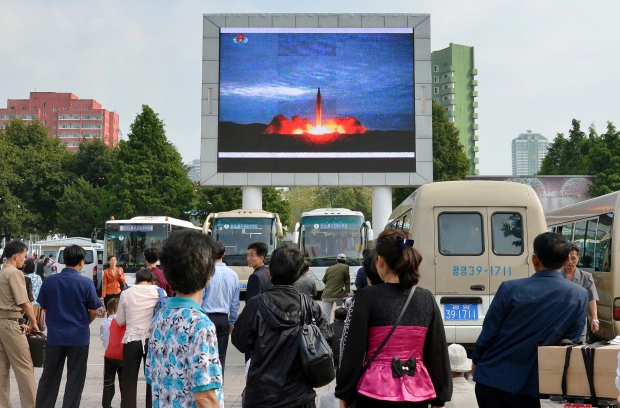 U.S. President Donald Trump on Wednesday dismissed any diplomatic negotiations with North Korea, saying “talking is not the answer,” one day after Pyongyang fired a ballistic missile over Japan and drew international condemnation.

“The U.S. has been talking to North Korea, and paying them extortion money, for 25 years. Talking is not the answer!” Trump wrote in a post on Twitter.

The White House isn’t immediately responding to questions about the meaning of Trump’s tweet.

The United Nations condemned North Korea’s “outrageous” firing of the missile, demanding that the isolated country halts its weapons program but holding back on any threat of new sanctions.

North Korea said the launch of an intermediate-range ballistic missile (IRBM) on Tuesday was to counter U.S. and South Korean military drills and a first step in military action in the Pacific to “contain” the U.S. territory of Guam.

The North’s leader, Kim Jong-un, ordered the launch to be conducted for the first time from its capital, Pyongyang, and said more exercises with the Pacific as the target were needed, the North’s KCNA news agency said on Wednesday.

“The current ballistic rocket launching drill like a real war is the first step of the military operation of the KPA [Korean People’s Army] in the Pacific and a meaningful prelude to containing Guam,” KCNA quoted Kim as saying.

North Korea this month threatened to fire four missiles into the sea near Guam, home to a major U.S. military presence, after Trump said the North would face “fire and fury” if it threatened the United States.

North Korea has conducted dozens of ballistic missile tests under Kim in defiance of UN sanctions, but firing a projectile over mainland Japan was a rare and provocative move.

“We are working closely with the fleet to develop this important new capability, and this was a key milestone in giving our Aegis BMD [Ballistic Missile Defense] ships an enhanced capability to defeat ballistic missiles in their terminal phase,” said agency director Lieutenant General Sam Greaves in a statement without mentioning North Korea. “We will continue developing ballistic missile defense technologies to stay ahead of the threat as it evolves.”

New UN sanctions not yet in offing

The 15-member Security Council said it was of “vital importance” that North Korea take immediate, concrete actions to reduce tension and called on all states to implement UN sanctions. However, the U.S.-drafted statement, which was agreed by consensus, does not threaten new sanctions on North Korea. Diplomats say veto-wielding council members China and Russia typically only view a test of a long-range missile or a nuclear weapon as a trigger for further possible sanctions.

Speaking in Beijing, Chinese Foreign Minister Wang Yi said China was discussing the situation with other Security Council members and would make a “necessary response” based on the consensus reached. China is the North’s lone major ally.

Unilateral sanctions did not accord with international law, Wang added, a reference to sanctions imposed on Chinese firms and citizens by the United States and Japan. 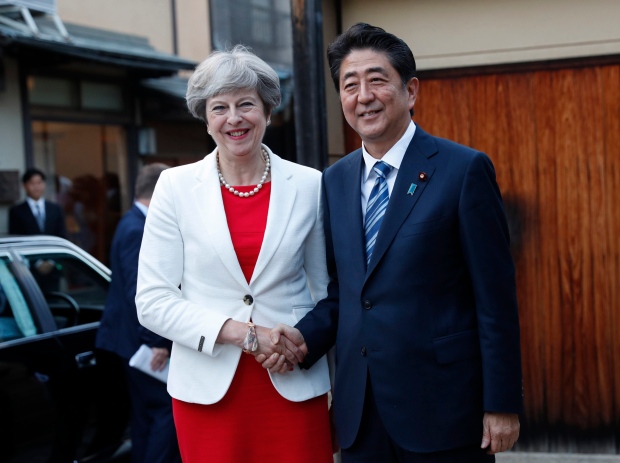 British Prime Minister Theresa May, left, who was welcomed by Prime Minister Shinzo Abe on Wednesday in Japan, called on China to play a key role in de-escalating the tensions between the international community and North Korea. (im Kyung-hoon/Pool/Associated Press)

Speaking during a visit to the Japanese city of Osaka, British Prime Minister Theresa May called on China to put more pressure on North Korea, saying Beijing had a key role to play. Asked about her comments, Chinese Foreign Ministry spokesperson Hua Chunying said some “relevant sides” were only selectively carrying out the UN resolutions by pushing hard on sanctions yet neglecting to push for a return to talks.

She said this was not the attitude “responsible countries” should have when the “smell of gunpowder” remained strong over the Korean peninsula.

Tuesday’s test was of the same Hwasong-12 missile Kim had threatened to use on Guam, but the test flight took it in another direction, over northern Japan’s Hokkaido and into the sea.

Trump, who has vowed not to let North Korea develop nuclear missiles that can hit the mainland United States, said the world had received North Korea’s latest message “loud and clear.”

“Threatening and destabilizing actions only increase the North Korean regime’s isolation in the region and among all nations of the world. All options are on the table,” Trump said in a statement on Tuesday.

Reports of the launch this week by North Korean media lacked the usual boasts of technical advances. The 2,700 km that the missile flew before splashing down was much shorter and at a lower trajectory than that of an earlier launch of the same missile type.

“It is not clear what new North Korea would have learned from this launch that is relevant to a long-range missile,” missile expert David Wright of the Union of Concerned Scientists said.

Kim Dong-yup, professor at the Institute for Far East Studies of Kyungnam University in Seoul, said firing the missile from a densely populated area near Pyongyang and over Japan suggested North Korea was confident in the missile’s stability.

“I do not think North Korea factored in much military meaning behind yesterday’s missile launch, rather yesterday’s launch was all about North Korea being stubborn,” he said. “At the same time, North Korea is hinting that there is room for negotiation if the U.S. and South Korea end the joint military exercises.”

Trump’s tweet appears at odds with his secretary of state. Rex Tillerson has been softening the conditions for a possible dialogue with North Korea.