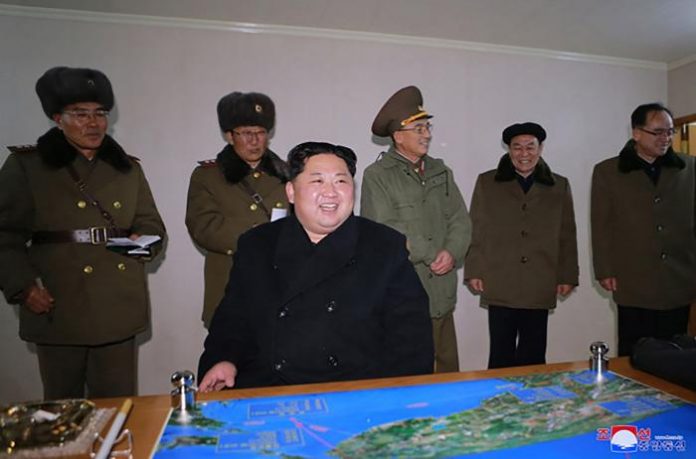 Dec. 27 (UPI) — As 2017 ends, some of the year’s biggest stories continue to unfold — the aftermath of natural disasters, tensions with North Korea, the Donald Trump presidency and a tsunami of sex harassment complaints among them.

Here’s a look back at some of the year’s biggest headlines:

Probe into Russian interference in election

The beginning of Donald Trump’s presidency drove the news all year on an abundance of issues —
from healthcare and tax reform to foreign relations and staffing the administration. But the story of how he got to the White House continues to dominate headlines.

U.S. intelligence agencies announced in October that they agree Russia was responsible for hacking Democratic National Committee computers as well as those of other Democratic figures and organizations during the 2016 presidential election.

This finding prompting four investigations — one led by FBI Director Robert Mueller, one in the House and two in the Senate — into whether members of Trump’s campaign colluded with the Russian government to sway the election.

Short-time White House National Security Adviser Michael Flynn arrives at the Federal Courthouse in Washington, D.C., on December 1. He pleaded guilty to lying to the FBI. Photo by Mike Theiler/UPI

Michael Flynn, Trump’s first national security adviser, became the first official to be charged in the special counsel probe when he pleaded guilty to making a false statement to the FBI regarding conversations he had with Russian Ambassador Sergey Kislyak.

Trump’s former campaign chairman, Paul Manafort, and aide Rick Gates were placed on house arrest as flight risks after pleading not guilty to charges of money laundering and conspiracy as part of Mueller’s investigation.

Court filings showed Mueller has 40,000 documents in the case against Manafort and Gates, 2,000 documents defined as “hot,” meaning they contain crucial information, and 116,000 domestic financial records which are considered “particularly relevant.”

Mueller and his team also acquired thousands of emails sent and received by members of the Trump for America transition group from the General Services Administration, which Arizona-based attorney Kory Langhofer claimed were obtained illegally.

The year brought some of the worst wildfires on record and one of the most devastating hurricane seasons in history.

Hurricanes ravaged the Caribbean and portions of the U.S. Atlantic and Gulf coasts, while powerful earthquakes rocked Central America and two rounds of intense wildfires burned through the West Coast.

Flames from the Thomas fire rim a crest of a mountain just after sundown looking east in Carpinteria, Califl, on December 11. Photo by Jim Ruymen/UPI

With 18 named storms including Harvey, Irma, Jose, Lee and Maria — which became “major” within 30 days — the 2017 Atlantic hurricane season caused nearly $370 billion in damage worldwide and $202 billion in the United States. Hundreds of people were killed.

More than 300 died in Mexico after two earthquakes, including the strongest to hit the country in 100 years.

A magnitude 8.1 earthquake struck Pijijiapan along Mexico’s southern coast just before midnight on Sept. 7 and was followed by a 7.1-magnitude earthquake in central Mexico nearly two weeks later on Sept. 19.

Nearly two dozen wildfires burned more than 170,000 acres in California in October, destroying at least 3,500 homes and killing more than 23 people as Gov. Jerry Brown estimated damage from the fires, some near wine country, could reach tens of billions.

Several wildfires threatened the state again in December, including the 270,500-acre Thomas fire which became the fourth-largest blaze by acreage since Cal Fire began keeping records in 1932.

Two people, including a Cal Fire engineer, were killed in the blazes and the Thomas fire destroyed 1,026 structures, including 756 homes, and damaged 242 more since it began on Dec. 4. This week, it is largely contained.

Widespread accusations of sexual misconduct rocked Hollywood, then spread to other industries, with stories from numerous women that they were assaulted by mega-producer Harvey Weinstein.

The scandal forced Weinstein to relinquish his role in the film business — and served as the opening salvo that unleashed similar accusations in news media, politics and other spheres.

Following news of the Weinstein scandal, the #MeToo movement surfaced online and encouraged other victims of sexual harassment to speak out. Stars including Kevin Spacey, Louis C.K., Brett Ratner and James Toback faced accusations that caused them to be fired or suspended from projects.

Harvey Weinstein has been accused of sexual misconduct by several women. After they spoke out, more allegations were lodged against many powerful men in Hollywood and other industries, ending careers for many of them. File Photo by John Angelillo/UPI

The corridors of government were rocked by allegations, as well. Minnesota Sen. Al Franken, Michigan Rep. John Conyers Jr. and British Defense Secretary Michael Fallon all stepped down after being accused of sexual misconduct. Meanwhile, Alabama Senate candidate Roy Moore narrowly lost his bid for Congress after several women claimed he’d sexually assaulted them years ago. Some said they were teenagers at the time; Moore was in his 30s. Subsequently, Alabama elected its first Senate Democrat in 25 years.

On Dec. 11, three women who accused Trump of of past sexual harassment called for Congress to investigate.

A week later, Jerry Richardson, owner of the NFL’s Carolina Panthers, said he would sell the team and step away from its day-to-day management following an investigation into workplace allegations against him, including sexual misconduct and the use of a racial slur.

On the first day of 2017, Kim promised North Korea would continue developing its nuclear arsenal and said the nation was preparing to test an intercontinental ballistic missile — capable of carrying a nuclear warhead to the United States. 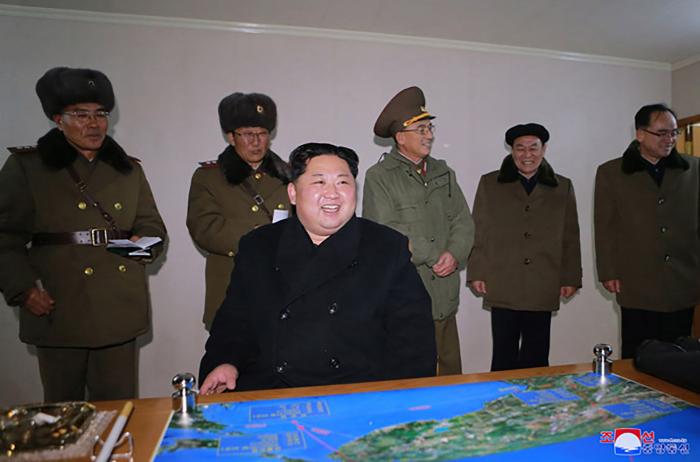 While speaking at the United Nations General Assembly in September, Trump said North Korea’s nuclear program “threatens the entire world with unthinkable loss of life,” and warned the United States would have no choice but to “totally destroy North Korea” if forced to defend itself or allies.

Trump and Kim also hurled insults at each other through speeches — and on Twitter throughout the year.

Trump also enacted several sanctions against North Korea, including placing the country back on the list of state sponsors of terrorism — which bars it from receiving U.S. foreign assistance, bans defense exports and sales and allows the United States to punish people or countries who trade with the country.

Beatrice Fihn, executive director of International Campaign to Abolish Nuclear Weapons, called for a ban on nuclear weapons while accepting the Nobel Peace Prize, claiming “the deaths of millions may be one tiny tantrum away.”

The year saw a continued trend of rising violence, from individual acts to terrorist plots.

The deadliest mass U.S. shooting in modern times took place on Oct. 1. Fifty-eight people were shot dead and hundreds were injured when Stephen Paddock fired a modified assault rifle into the crowd at a country music festival in Las Vegas.

About a month later, 26 people were killed when Devin Kelley opened fire on a church congregation in Sutherland Springs, Texas.

Josephina Gutierrez (L) holds her hands in prayer during a candlelight vigil on the corner of Las Vegas Boulevard and Sahara Avenue after the shooting. File Photo by Ronda Churchill/UPI

Eight people were killed and 11 others were injured Oct. 31 when a man drove a rented truck onto a bike path in New York City. Another eight were killed in a similar attack in Britain when three masked men drove a van into pedestrians on a bridge before stabbing people at random.

In May, a suicide bomber killed 22 people and injured 59 at an Ariana Grande concert in Manchester, Britain. A subsequent report by Barrister David Anderson said the bombing could’ve been prevented if Britain’s M15 intelligence agency had taken proper action.

The United States experienced its first total solar eclipse in nearly four decades on Aug. 21, an event that sent millions flocking to witness the event from the “path of totality” — or the 2,000-mile-long swath that would fall into complete darkness.

The astronomical phenomena turned into a major cultural event. People across the country attended watch parties, bought special glasses and marked on social media the historic moment as the moon slid in front of the sun.

Outside the path of totality, viewers still caught a glimpse of the event, even if they didn’t see the morning fall into complete darkness.

Trump witnessed the moon cover 81 percent of the sun as he watched the eclipse from the White House’s Truman balcony, with his wife, Melania Trump, and son Barron. One aide shouted, “don’t look” when Trump initially came out and gazed skyward, before the first family donned their eclipse glasses.

The eclipse prompted what was believed to be the largest mass migration in human history. Experts said more than 200 million Americans were within a day’s drive of the path of totality — in Oregon, Idaho, Montana, Wyoming, Nebraska, Iowa, Kansas, Missouri, Illinois, Kentucky, Tennessee, North Carolina, Georgia and South Carolina.