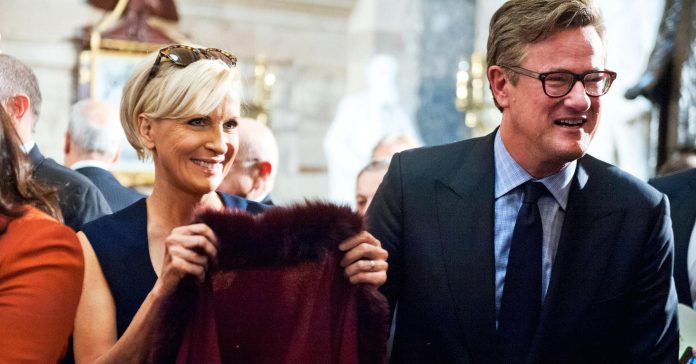 President Donald Trump unleashed on media again Thursday, this time with personal attacks on the anchors of MSNBC’s “Morning Joe.”

In a pair of morning tweets, Trump said he heard the show’s hosts Joe Scarborough and Mika Brzezinski — who were known to have the president’s ear in the past — speak “badly of me.” He then said that “low I.Q. Crazy Mika” and “Psycho Joe” came to his Mar-a-Lago resort around New Year’s Eve and wanted to join him, but he “said no!”

He added that Brzezinski was “bleeding badly from a face-lift” at the time.

Trump: …to Mar-a-Lago 3 nights in a row around New Year’s Eve, and insisted on joining me. She was bleeding badly from a face-lift. I said no!

Brzezinski then tweeted a picture of a Cheerios box featuring the phrase “made for little hands.” Trump is reportedly sensitive about jokes about the size of his hands.

In a tweet, Mark Kornblau, NBC News senior vice president of communications, said he “never imagined a day when I would think to myself, ‘it is beneath my dignity to respond to the President of the United States.'”

Critics said his comment about Brzezinski’s face-lift was reminiscent of crude remarks he made about women on the campaign trail.

Various Republican lawmakers have criticized the president for crude comments in the past and some did so again Thursday. But very few GOP lawmakers have fully distanced themselves from the president despite his prior comments, including ones from a 2005 “Access Hollywood” tape in which he bragged about groping women.

Lindsey Graham: Mr. President, your tweet was beneath the office and represents what is wrong with American politics, not the greatness of America.

Ben Sasse: Please just stop. This isn’t normal and it’s beneath the dignity of your office.

The tweets mark Trump’s latest Twitter attack on media outlets at a time when Trump aides reportedly want him to keep the narrative focused on policy efforts. They come as the White House is pushing a week of events related to American energy production and Trump touts his efforts to help Senate Republicans pass their Obamacare replacement bill.

Trump started Wednesday by accusing The New York Times of writing “false story after false story about me.”

In an unusual later tweet, he called The Washington Post — which is owned by Amazon CEO Jeff Bezos — “fake news.”

Disclosure: NBCUniversal is the parent company of MSNBC and CNBC.