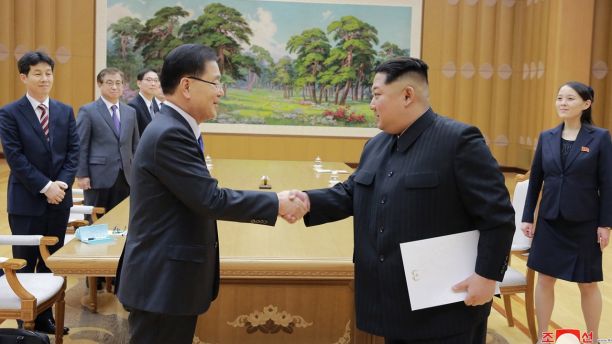 The decision to meet with Kim Jong Un in the coming weeks was one that President Donald Trump made “himself,” U.S. Secretary of State Rex Tillerson said Friday, attributing the move to a “dramatic” change in posture by the North Korean leader.

“President Trump has said for some time that he was open to talks and he would willingly meet with Kim when conditions were right,” Tillserson said during a visit to the African nation of Djibouti. “And I think in the president’s judgment that time has arrived now.”

According to Tillerson, the U.S. has seen a shift in Kim from “not just willingness but really his desire for talks.”

The news that Trump had accepted the North Korean leader’s invitation to meet was greeted positively Friday by officials in China, Russia and South Korea — three major players in efforts to resolve the ongoing dispute between the U.S. and North Korea over the Hermit Kingdom’s nuclear ambitions.

China’s foreign ministry said it hopes all parties to the dispute will “show their political courage” in restarting negotiations, and pledges its support in working toward that goal.

Russian Foreign Minister Sergey Lavrov was quoted by Russian state news agency Tass on Friday saying — during a visit to the Ethiopian capital Addis Ababa — that Russia considers the move by Trump and Kim to be “a step in the right direction.”

South Korean Foreign Minister Kang Kyung-wha said, during a visit to Hanoi, Vietnam, that her government was consulting with the U.S. on the planned summit — and hopes that if it does take place, “it’s a meaningful meeting with good outcome.”

News of the planned meeting between Trump and Kim, which the White House confirmed Thursday night, was a dramatic development after months of saber-rattling between the two world leaders.

Kim extended the invitation and the president agreed that the two would meet by May, South Korean National Security Adviser Chung Eui-yong announced at the White House.

“Kim Jong Un talked about denuclearization with the South Korean Representatives, not just a freeze,” Trump tweeted. “Also, no missile testing by North Korea during this period of time. Great progress being made but sanctions will remain until an agreement is reached. Meeting being planned!”

Trump, according to White House press secretary Sarah Sanders, “will accept the invitation to meet with Kim Jong Un at a place and time to be determined.” But, Sanders added, “in the meantime, all sanctions and maximum pressure must remain.”

Earlier Thursday, Chung announced that Trump would meet with Kim to “continue the goal of denuclearization.”

Kim “expressed his eagerness to meet President Trump as soon as possible,” Chung said. “President Trump appreciated the briefing and said he would meet Kim Jong Un by May to achieve permanent denuclearization.”

Kim, according to Chung, understands that joint military exercises between South Korea and the U.S. would continue. The North Korean leader, according to recent talks with Chung, also claimed to be “commited to denuclearization.”

“He (Kim) pledged that North Korea will refrain from any further nuclear missile tests,” Chung said, adding that Trump’s “leadership” and “maximum pressure” brought us “to this juncture.”

Chung said that “along with President Trump,” he is “optimistic of continuing a diplomatic process.” But he added that “the pressure will continue until North Korea matches its words with concrete actions.”

News of the willingness of Kim to meet with Trump follows recent high-profile talks between North Korea and South Korea.

Earlier Thursday, Trump announced that South Korea would be making a “major statement” about North Korea. Chung met at the White House earlier in the day with U.S. National Security Adviser H.R. McMaster.

Chung and other South Korean officials briefed the White House Thursday on a potential diplomatic opening with North Korea after a year of escalating tensions. Chung told reporters Tuesday that he had received a message from North Korea intended for the United States, but did not disclose what it was.

Trump and Kim have had a contentious relationship during the last year as both men dramatically increased the rhetoric against the other amid the backdrop of increased nuclear and missile testing by the North Korean regime.

In August Trump warned Kim that, if pressed, the U.S. would unleash “fire, fury and frankly power, the likes of which this world has never seen before.” At the time, the president argued that Kim had “been very threatening beyond a normal state,” adding that the regime “best not make any more threats to the United States.”

However, threats and counter-threats continued into 2018.

“The U.S. should know that the button for nuclear weapons is on my table,” Kim said during a Jan. 1 speech, according to a translation. “The entire area of the U.S. mainland is within our nuclear strike range,” he continued, adding that “the United States can never start a war against me and our country.”

The next day Trump hit back against Kim by claiming that the U.S. nuclear arsenal was more powerful. “North Korean Leader Kim Jong Un just stated that the ‘Nuclear Button is on his desk at all times,'” Trump tweeted. “Will someone from his depleted and food starved regime please inform him that I too have a Nuclear Button, but it is a much bigger & more powerful one than his, and my Button works!”

The last round of significant talks involving the U.S. and North Korea concluded in 2009. The so-called six-party talks, which involved the U.S., North Korea, South Korea, Japan, Russia and China, ended when North Korea walked out.